Face it, PCI- and PCI-Express-based soundcards don't always cut it for professional-quality recording. Despite offering digital, optical, line-ins, and microphrone inputs, soundcards simply can't accommodate every piece of high-end audio equipment. Many companies have solved this issue by building external break-out boxes with a variety of additional inputs and outputs, but these boxes lack mobility. Where are the break-out boxes for laptop recording studios?

This is where the MicPort Pro from CEntrance comes in. The MicPort Pro bridges the gap between XLR connections and USB, bringing a wide range of audio options to the table. While promising true 24-bit / 96KHz audio, the MicPort Pro is no bigger than the handle of a microphone, so can it really deliver the audio quality we'd like to see?

The MicPort Pro acts as a microphone preamp, meaning it increases the voltage coming from a microphone. The more important idea behind the MicPort Pro is that it allows the mobile artist, musician, or even podcaster to easily record from almost any location with minimal equipment movement.

The MicPort Pro came to us in simple black-and-white packaging, prominently displaying the name of the product, CEntrance's logo, and the product itself visible through a plastic window.

The rear of the packaging gives a full product description, as well as some of the key uses of the MicPort Pro. I think the big winners here are: "No drivers. No batteries. No latency. No headaches!" Below the description are the MicPort Pro's specifications.

Inside the packaging is the unit itself, an instruction manual, a USB cable, and a felt bag to carry the unit in.

As I stated earlier, the MicPort Pro is no larger than the handle of a handheld microphone. There's an XLR female connection on one side. The body of the MicPort Pro is made from anodized aluminum for ruggedness, meaning it won't crush easily.

On the side opposite the XLR connection, there is also a 1/8" jack for hooking up headphones and a small button used to activate the MicPort Pro's phantom power.

Before testing the MicPort pro, let's look at the unit's features and specifications.

The MicPort Pro was created with the mobile artist in mind, featuring an impressive and fully loaded feature set.

What I'd really like to look at that isn't a feature of the MicPort Pro is Linux support. Since the MicPort Pro is supposed to be recognized in both Mac OS X and Windows without having to install a driver, I wonder if it will work the same in Linux.

Before testing this thought, let's look at the specifications of the unit and see what powers the capabilities of the unit.

Having some of the BIOSLEVEL.com writers over to my house for this review, we connected the MicPort Pro up to my AMD Phenom-powered computer hosting Kubuntu 11.10. Using the supplied USB cable, connecting the MicPort Pro was easy. On top of a simple installation, the clear acrylic band near the top of the unit lights up via a white LED when plugged in.

CEntrance advertises Linux as a supported operating system, and they live up to this claim.  Upon plugging the MicPort Pro into a free USB hub, I noticed the device was instantly picked up by checking dmesg.

Seeing that the device is picked up as snd-usb-audio is promising, but it is still necessary to test whether or not the device does indeed work in Linux.  “Working” being defined as both the input and output of the MicPort Pro are fully functional.

To verify both the input and output are functional, I'll begin by checking my system settings in KDE and ensuring I'm able to select the MicPort Pro as a valid multimedia input and output device.

I started Audacity next, and selected the MicPort Pro as the preferred input.  When I tested recording, everything worked exactly as if I'd been using my internal soundcard.  The quality of recording?  Read on!

I don't claim to be an audiophile or audio engineer, but I do know a thing or two about audio quality, and I like to think I have a good ear. Additionally, the MicPort Pro can be limited in audio quality depending on the microphone in question. I happen to be in possession of two rather pricey Shure microphones. The microphones I tested the MicPort Pro with were the the Shure SM58-LC Vocal Microphone and Sennheister e815S.  Neither of these microphones required phantom power.

As I had several writers at my house while the MicPort Pro was in my possession, I decided to let one of our more vocally-endowed members take the microphone.

Aside from having the microphone a little close to his mouth, I found the audio to be rather crisp and clear. There should be little stopping artists from utilizing the MicPort Pro to record while on-the-go.

I know several individuals who record podcasts and music on the go, whether from locales such as Panera and Borders Book Stores, friend's houses, or school. After bringing their attention to the MicPort Pro, I had them all intrigued by the device. CEntrance's own tagline for the unit, "No drivers. No batteries. No latency. No headaches!", highlights the MicPort Pro's ease-of-use.

The latest iteration of Ubuntu, 11.10, had detected the MicPort Pro without any issues. We easily were able to use the MicPort Pro with a variety of applications, from Banshee for music, to Audacity for recording.  Audio recorded from the MicPort Pro on Ubuntu is crisp and full, while output is as clear as you'd expect from your onboard audio.

With phantom power as a major feature, as well as the ability to record in stereo using two of the units, the CEntrance MicPort Pro is a win-win product for the mobile artist, amateur, and professional that needs to make recordings. Who knows, maybe BIOSLEVEL will have a podcast in its future. 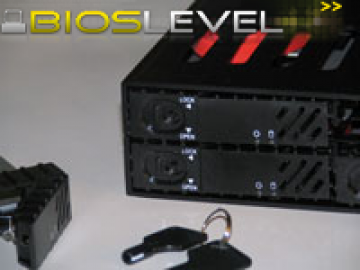