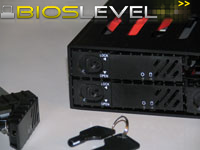 A few years ago, the only way to find a reasonable method of storage for both a decent price and decent capacity was to purchase 3.5" drives. Now, we are able to purchase 2.5" hard drives containing hundreds of gigabytes of space. Not only this, but many of the latest solid state drives (SSD) are being released in the 2.5" form factor as well. People finally have a choice about the form factor of their storage.

StarTech.com sent us the SATABAY425BK, a Serial ATA (SATA) / Serial-Attached SCSI (SAS) backplane that fits in a single 5.25" drive bay and can hold up to four 2.5" hard drives in hot swap trays. The backplane supports both SAS and SATA's 3Gbps transfer rates, and utilizes a pair of 40mm fans in the rear to cool the drives.

The SATABAY425BK was packed into a white cardboard box with a spiffy plastic handle that folded in or out. The only label on the box was on the front, which was the StarTech.com product label and a short feature list. 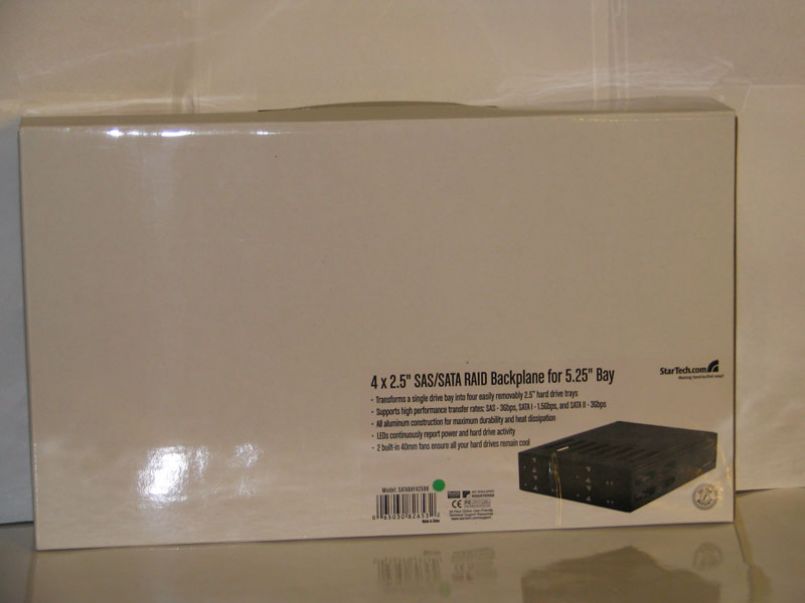 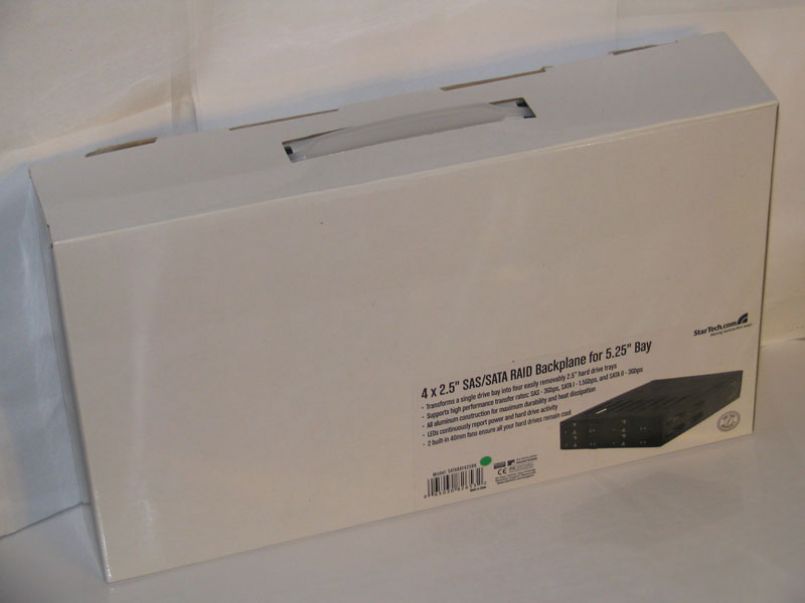 Inside the box was a smaller white cardboard box, and the drive itself in a plastic casing. The smaller box held the included SAS cable. 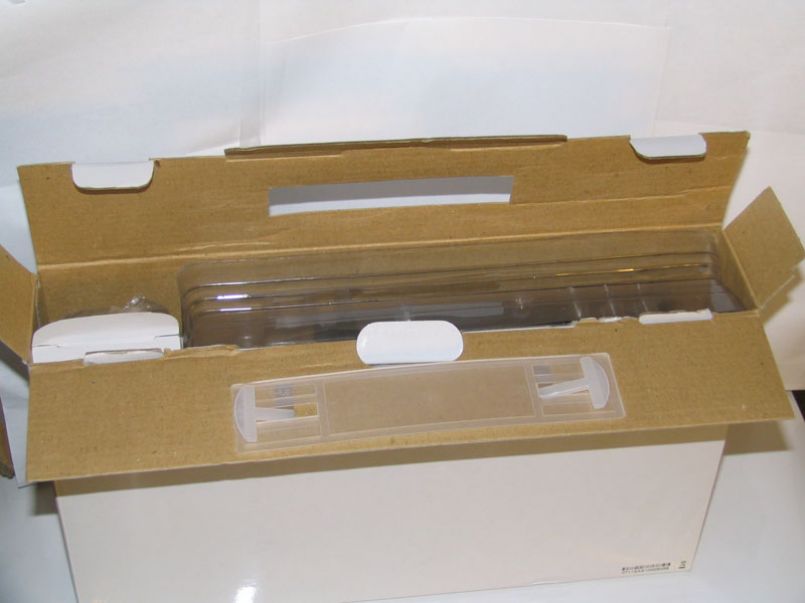 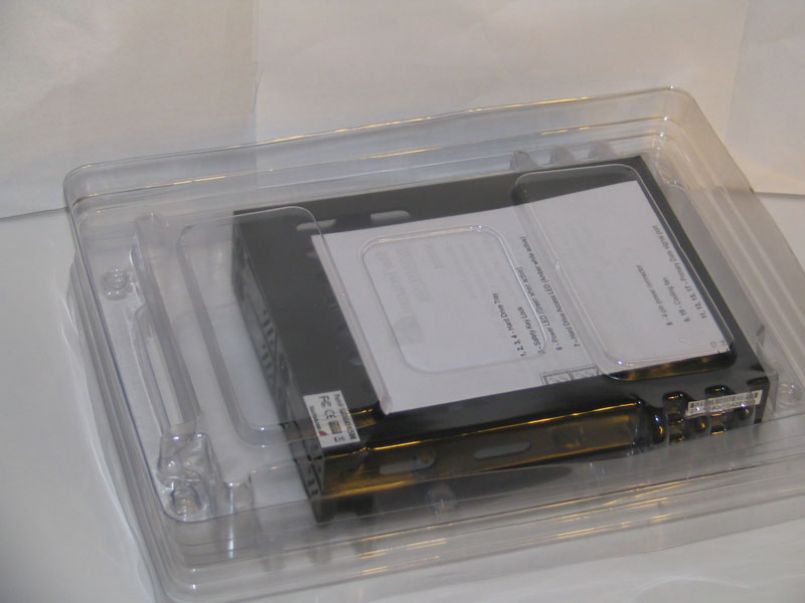 The casing simply pulled apart, there wasn't any tape or the like to remove. Simple, but effective. Before installing the drive, let's look at the features.

The SATABAY425BK is constructed with aluminum, both chassis and racks, providing excellent passive cooling. The two fans in the rear cycle cold air into the mix. It's sturdy to the touch—it feels more solid than a typical optical drive. I think the aluminum is a thicker grade, and the device is meant for server and workstation usage, so the construction is a little more heavy-duty than average components.

Let's look at StarTech.com's full list of features for the SATABAY425BK:

I remember reading about Serial-Attached SCSI (SAS) and Serial ATA (SATA) before the drives with these ports were ever released, and it made me excited to know that they're be interchangeable, or at least to an extent. SATA drives will work with a SAS controller, but SAS drives won't work with a SATA controller. It's an unfortunate circumstance, but at least the port layout on the back of the drives are the same. The SATABAY425BK can support either standard, even in a mixed mode if need be.

There are also two LEDs per drive, one to show that the drive is powered, and the other to show activity. There isn't a failure light, which may be something the manufacturer should look into. I'm still kind of bewildered that we can fit four 2.5" drives in a single 5.25" bay. Let's look at the technical specifications to get a better idea of all the physical dimensions and properties of the unit.

Sure enough, the physical dimensions look right at 1.25" tall by 7.2" deep by 5.25" wide. It's roughly the same size as an optical drive. Since the drives are much smaller than 3.5" drives, not much depth is needed. I think it's a little disturbing that the enclosure without any drives is about half as heavy as my MacBook, which weighs in at 5lbs. Let's move on to the installation of the unit.

Installation was probably simpler than many other hotswap bays I've dealt with before. Included with the unit is a pair of keys. They are similar to the ones used to lock cases, but instead of having a notch on the outside, the inside of the key is triangular. Using the key, I turned the triangular lock on one of the trays to the unlock position. Pulling out of the latch of this tray, the tray slid out without an issue. 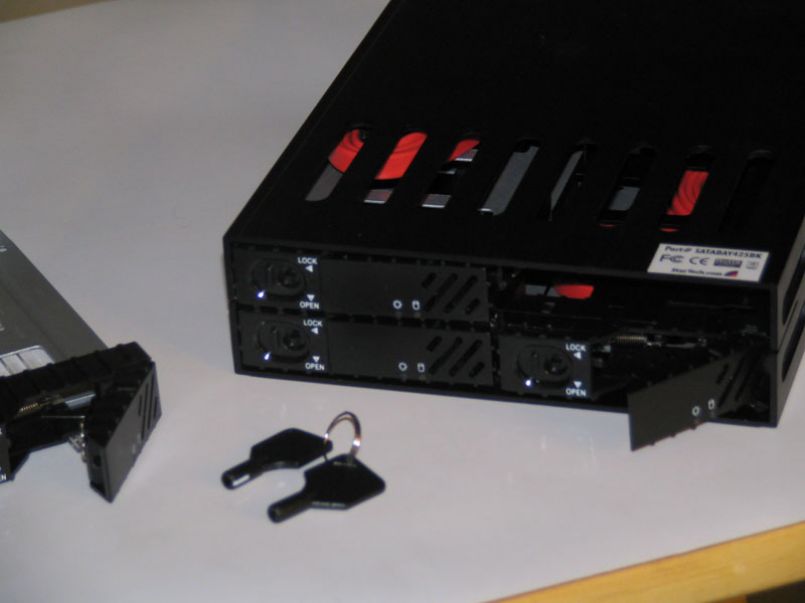 The racks are open, rather than enclosed like many 3.5" hotswap trays. This makes it much easier to install the drives, and for the rear fans to cool the drive. The SATA cables for the device were in the trays, neatly wrapped. Installing the drives was a breeze. They screw in from the bottom of the tray, utilizing the holes on the bottom of the drive. There's no noise dampening with this unit, but remember that it's meant for servers and workstations, not your home theater. On the bottom, I also noticed two pieces of plastic, used channeling the activity and power LEDs to the front of the tray. The trays slid back in fairly easily, and I could feel the resistance of the SATA interface connecting. Using the keys, I locked the trays back in place to make sure no passerby pulled one out in curiosity. The next step was to mount the device in the tower. Our test rig for testing the SATABAY425BK consists of a Core2 Duo E6300 processor, 2GB of WinTec DDR2-1066 RAM, a Xigmatek HDT-S1283 heatsink, and a StarTech.com WattSmart 750W Power Supply. To benchmark the unit, I'll be using Gentoo Linux and Windows XP. On the rear of the unit, there are a total of eight SATA ports, or two per drive. For each drive, one is designated primary, and the other secondary. Since I'm using my motherboard's onboard SATA controller, I have no need of designating a drive as secondary. Also to note on the back is a jumper for changing the fan speed. Since my case is fairly well ventilated and my room usually hovers around 65°F, I shouldn't have any heat issues if I set the jumper to low. However, if I were using high-speed SAS drives in this unit, I'd probably leave the setting on high. I ran into no clearance issues while inserting the SATABAY425BK in to my case. The unit screwed into the drive bay with ease, and the next step was to connect the SATA drives and power connection. The unit as a whole will run with both fans and four drives off a single molex connector. The drives showed up in Windows without a problem. After formatting and partitioning the drives, I was ready to go. To benchmark the drives, I tested a drive in the unit first, then removed the drive hooked it directly to the motherboard and a power connector.

The first benchmark I used was HDTach, a nice benchmarking tool specifically made for hard drives. HDTach returns to us several results, but all related to read speeds. I'll have to run a second benchmark to look at read performance. Let's look at how the drive performed in HDTach. The results aren't all that impressive, but keep in mind I'm working with 5400RPM drive. 2.5" drives are typically slower than their 3.5" counterparts, with the exception of SAS drives. Also, it can be noted that the graphs and speeds are the same for each way I tested the drive (in the SATABAY425BK, and connected directly to the motherboard). This isn't a complete surprise, and it's definitely a good sign for the unit. This means the unit doesn't contribute to the drive's read performance.

Since HDTach doesn't support write tests, I opted to go the old fashioned route and copy a file from a faster drive. I've installed a 36GB Western Digital Raptor for this purpose, ensuring the 2.5" drive will be the bottleneck of the transfer. I've selected a 750MB movie file to transfer. Let's see how long the transfer takes when the drive is in the SATABAY425BK, and then when it's connected directly to the motherboard.

Once again, I don't see a discrepancy between the two connections. The SATABAY425BK looks solid for speed, as the unit doesn't impede on performance.

I'm not expecting different results in Linux, but there's always a chance.

For Linux, I'm going to run the tests much the same as I did in Windows. Instead of utilizing a full-fledged benchmark utility such as HDTach or Bonnie++, I'm relying on hdparm's built-in benchmarking utilities. hdparm stands for Hard Drive Parameters, and adjusts just that. Specifically, hdparm has a wide set of tools for ATA drives, such as adjusting the DMA. For other drives, the options become much more limited, as they rely more on hardware settings than software.

Next, I ran the test again with the drive connected to the motherboard rather than the SATABAY425BK.

Not much of a difference at all, just as we saw in Windows. As a final test, we'll be performing the same transfer benchmark as we did with Windows: copying a 750MB drive from a Raptor to the hard drive within the unit.

As expected, there's little difference between the connections. The SATABAY425BK hasn't cost any performance to the host system.

Given my benchmarks, it's safe to say that StarTech.com's four bay SATABAY425BK 5.25" SATA/SAS backplane is fantastic addition to any desktop, workstation, or server. The unit does not impede on disk performance, and the dual 40mm rear fans keep the drives cool.

The SATABAY425BK offers compatibility with both serial-attached SCSI (SAS) and serial-attached ATA (SATA), and I can even mix and match drives if I wanted. In this way, the SATABAY425BK isn't meant for adding low-end laptop drives to your system, but rather gives me the ability to add some real performers with SAS drives running 10,000-15,000 RPM. Or, if I had the money, I could also add a few solid state drives.

The possibilities are endless, but if you're like me, you'd probably drool at the idea of utilizing two of these units to built an 8-drive SAS array in RAID5. Even with only as single unit and four drives, a very powerful array could be created in a single 5.25" bay. Remember the days when single hard drives came in that form factor?

For the solid performance and overall coolness factor we're still feeling from this drive, we've decided this product has earned our Editor's Choice Award. Head on over to StarTech.com to pick up one of these.