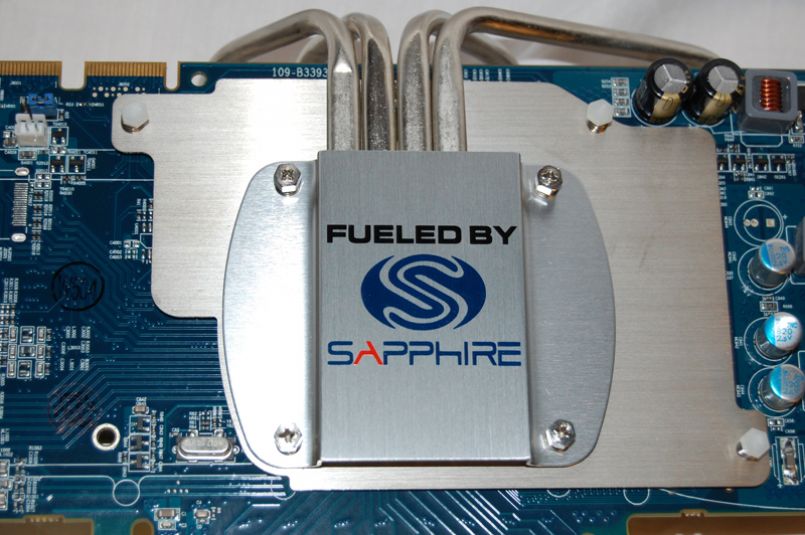 There's nothing more dissatisfying than when everything in a computer case is silenced except the video card. Water cooling is always an option, but there's always a certain level of risk with it. Sapphire has answered this question with the Radeon HD3870 ULTIMATE video card.

The Ultimate's packaging isn't unlike many other video card boxes you can pick up these days, with the exception that it holds Sapphire's own customizations. Unlike the Silver avatar on front of the Toxic, the Ultimate feature's Sapphire's lovely female avatar complete with sword and gun. To her side are the Ultimate's main features: PCI-Express Version 2, HDMI Support, HD Audio, and 512MB of GDDR4 memory. 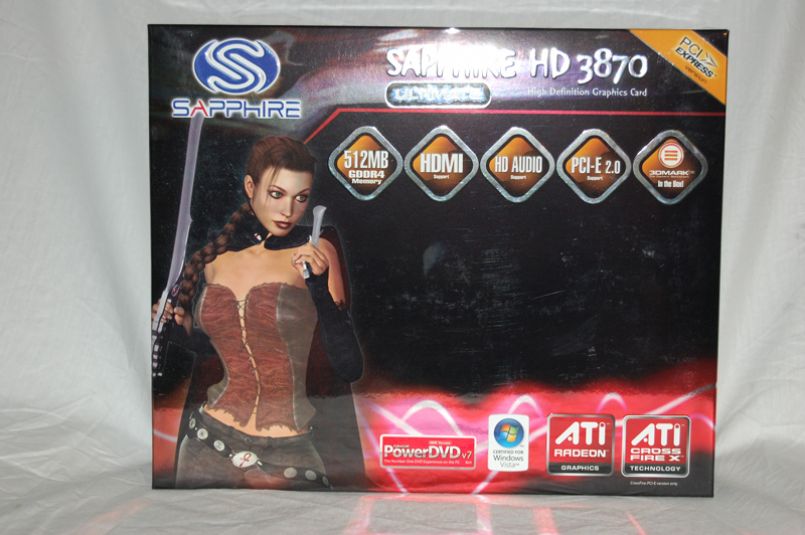 On the rear of the box are the package's contents, which include the card and software, and a short description of the card. Sapphire describes the HD3870 as a mid-range product, which I wouldn't doubt with the price tag. The HD3870 X2 is the performer in this group. 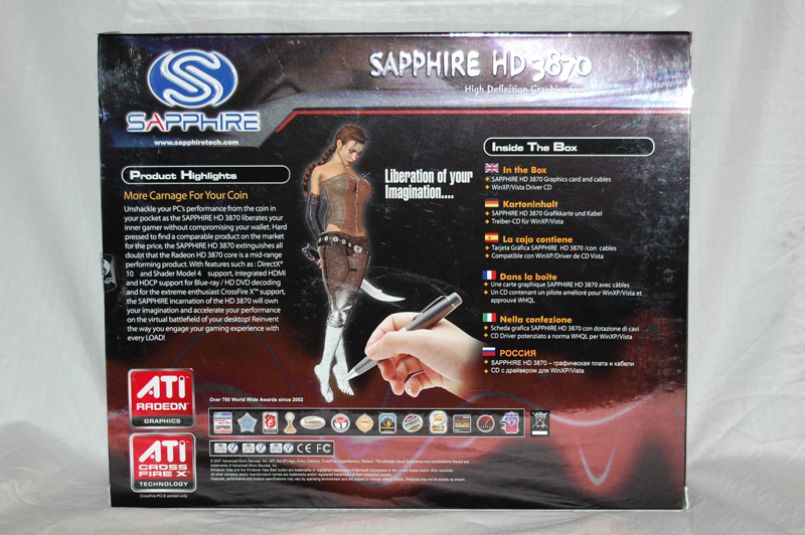 Upon opening the box, I was greeted by something a little different. Foam was lining the top to protect the contents from being crushed, but the card itself is in a plastic case, rather than anti-static bags. I think this presentation works out a little better to impress. 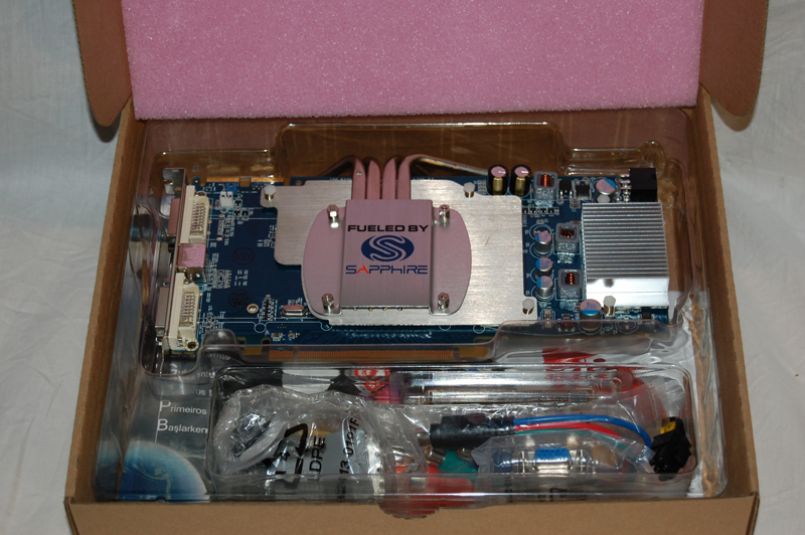 Under and below the card were numerous accessories: CrossFire connectors, HDMI adapters and cables, an s-video adapter, component video cables, the instruction manual, and packaged software CD's. 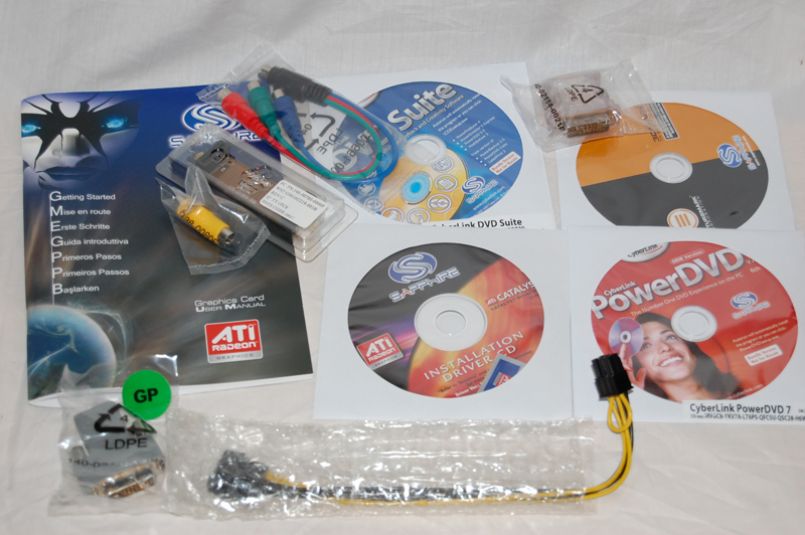 Let's take the card from the casing and install it into our AMD Phenom X4-powered testing rig.

The Ultimate is the same length as the Toxic, and it measures up to be almost the same size as the nVidia GeForce 8800GTS at 220mm Ã—100mm. The heatsink on the Ultimate is massive. 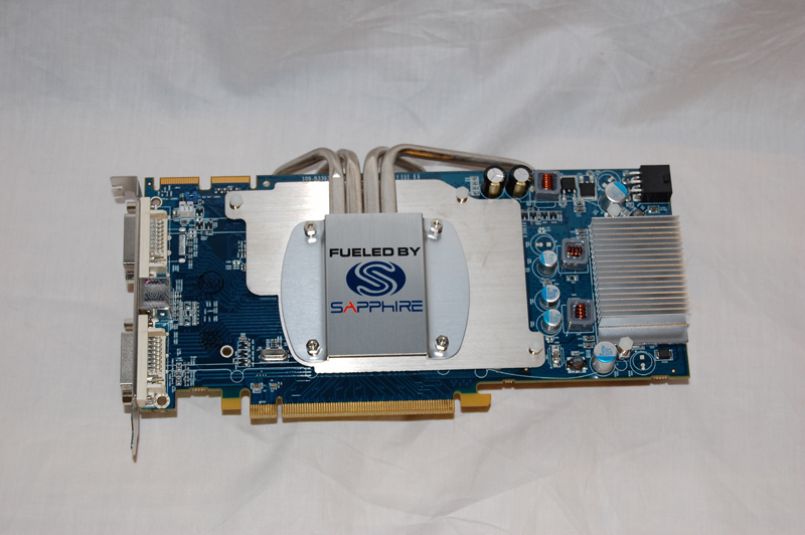 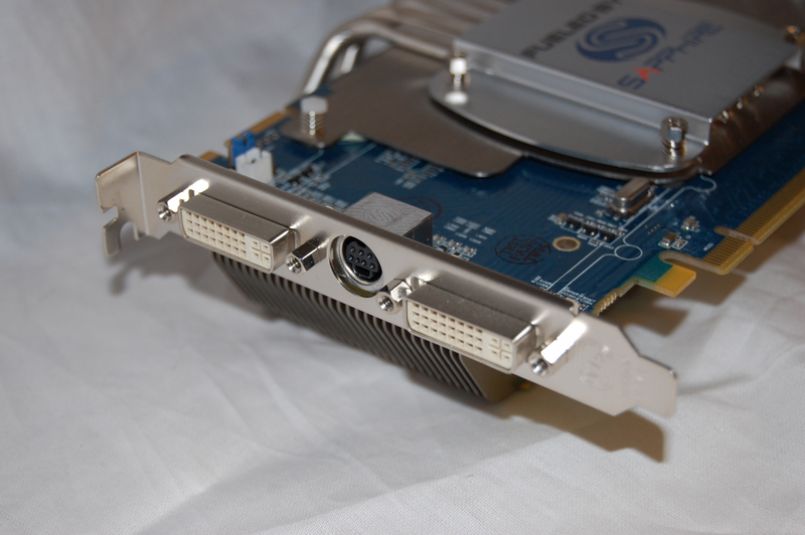 Heat from the GPU's heatsink is transferred by four heatpipes to the massive set of fins on top of the card. If this card is installed in the first PCI-E slot on a motherboard, it still definitely covers one or two slots above it if there are any. 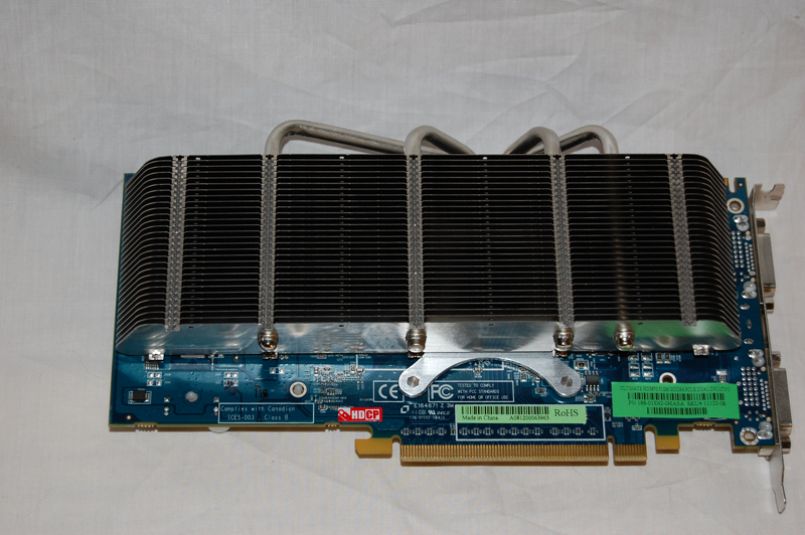 The Radeon HD3870 Ultimate is powered by a single 6-pin PCI-Express connector, as the power from the PCI-Express x16 slot isn't sufficient. Next, I look at the Radeon HD3870 Ultimate's specifications and features before getting to the installation of the card.

Much like the Toxic, the Radeon HD3870 Ultimate features the latest PCI-Express 2.0 interface, doubling the bandwidth of the previous generation of PCI-Express. The GPU of this unit is built on a 55nm process and features 666 million transistors, which is roughly 200 million more than AMD's latest Phenom CPU has. The GPU features a unified architecture, providing faster performance and DirectX 10.1 support with Shader Model 4.1.

The Unified Architecture provides 320 stream processing units, which enables parallel processing much like a multi-CPU computer. Aside from superb texture rendering and anti-aliasing capability, the card also delivers physics processing support with the Havok physics engine.

Pairing with the GPU and PCI-Express 2.0 interface is a 256-bit GDDR4 memory interface, providing more than enough bandwidth for graphic-intensive applications such as 3D rendering and gaming. The Ultimate ships with 512MB GDDR4 RAM standard.

While the card supports DirectX 10.1, it also supports OpenGL 2.0, which should aide performance under Linux and Windows OpenGL games. The card also supports ATI's Avivo HD Video and Display platform, which enables video decoding acceleration for the MPEG and DivX video formats, along with great control over colors, gamma, and conversion/scaling of video.

On the rear of the card are two DVI ports and a single S-Video output. The Radeon HD3870 supports up to two displays, each capable of running at it's own resolution up to 2560x1600. The DVI ports are also capable of HDMI transmission with an adapter, and the cards is HDCP compliant, enabling playback of digital content such as Blu-Ray and HD-DVD over HDCP compliant displays. The HDMI connection also supports multi-channel AC3 audio support, meaning the HD3870 also has it's own sound engine.

The HDMI connection supports displays up to 1920x1080 in resolution, and the integrated AMD Xilleon HDTV encoder is able to output high-quality HDTV and SDTV pictures.

To meet the demands of those seeking "green PCs" and lower power bills, the HD3870 Ultimate features ATI PowerPlay for throttling speed based on usage and temperature.

One of the biggest selling points of the Radeon HD3870 is support for CrossFireX, which allows you to scale from two to four GPUs for incredible performance. CrossFire bridges are required between the cards, as well as a matching number of PCI-Express x16 slots, but the performance gain should be more than enough to attract those with the currency.

Enough with the product specifications. A full list can be found on Sapphire's product page for the Radeon HD3870 Ultimate. I want to get the card into the system.

As mentioned before, I'm installing the Sapphire Radeon HD3870 Ultimate in to my Phenom 9500-powered computer. This is the same system I used to benchmark the HD3870 Toxic.

Installation was simple, as I only needed to insert the card in to the PCI-Express x16 slot and connect the 6-pin power cable to the card. Running with the 6-pin cable runs the risk of damaging the card, as well as reduced performance. I got the latest ATI drivers for Windows from AMD's website, since the latest driver release was on May 21st, well after this card arrived.

Since this system is running a 64-bit version of Windows Vista, the benchmark results we find here will be slightly lower than what we'd expect to see in Windows XP or Windows 2000. However, 64-bit is the next step in computing, so we feel benchmarks in a 64-bit environment are more realistic for many new machines. Whereas the Toxic scored 9021 in 3DMark06, the Ultimate scored 8785, a mere 236 points behind the Toxic. For a slightly slower clock speed, these are fantastic results.

Unreal Tournament 2004 was once again the oldest game we used to benchmark this system. The game may be a little older, but it remains a reasonable benchmark for raw performance. UT2004 was also one of the first games to have a native 64-bit port. We ran a simple bot match with all the settings on high. To run the botmatch and record our desired results, we used to following command line options: ut2004 dm-rankin?spectatoronly=1?numbots=12?quickstart=1?attractcam=1 -benchmark -seconds=77 -ini=default.ini Quake 4 features a slightly newer and more advanced engine than Unreal Tournament 2004. Graphics were set to the max, and symmetric multiprocessing was enabled to take advtanged of all four cores of the Phenom. Again, the Ultimate manages to keep up with the Toxic.

Half-Life 2 has some of the most impressive graphics that can be found in games made before Crysis and games featuring the Unreal 3 engine. In addition to fantastic graphics, Half-Life 2 also features great physics, making using of the CPU as well as the GPU. There's a little trend going on with the Ultimate, where it falls only slightly behind the Toxic, but over the GeForce 8800GTX.

Epic's latest installment of the Unreal Tournament series is based on the Unreal 3 engine, the same engine that powers games such as Gears of War, BioShock, and Stargate Worlds. When installed under Vista, Unreal Tournament 3 is able to utilize DirectX 10 for improved graphics and lighting. Like any graphical improvement however, there is a hit on performance, as the graphs below will show.

For this review, I've once again used ut3bench, which allows me to define my graphical settings and features. I'm only testing this card in DirectX 10 mode, to see how much performance I can get from the card. Once again, the performance is very much similar to the Sapphire Radeon HD3870 Toxic. Again, the Ultimate falls between the Toxic and GeForce 8800GTX.

Ubuntu's latest 64-bit release —8.04— powered our test machine for the Linux portion of this review. It offered an ease of setup, particularly with the Radeon drivers. The Unreal Tournament 2004 benchmark was completed much the same way as in Windows: 64-bit and full graphics on a time botmatch. The only difference is that Linux uses OpenGL to render the game instead of Direct3D. Quake 4 is also another game with a native Linux port, making it easy for us to compare results with the Windows edition. Unlike UT2004, Quake 4 is a 32-bit binary. The Radeon HD3870 Toxic and Ultimate both fall behind the GeForce 8800GTX in Linux. This is mostly due to ATI's Linux drivers. While the drivers have improved significantly since AMD bought ATI, the drivers aren't quite up to par with AMD's just yet.

The Sapphire Radeon HD3870 Ultimate, which clocked only slightly slower, manages to keep up with its faster counterpart very well, and does so with a passive cooling solution.

The Radeon HD3870 Toxic ran at idle with a temperature of 41°C and ran at 58°C under load. I wasn't sure how the Ultimate was going to perform with the passive cooler, but I had nothing to worry about. The card idles at 45°C and heats up to 61°C, which isn't bad at all. I wasn't expecting much higher temperatures.

The Sapphire Radeon HD3870 Ultimate is just another example of Sapphire's ingenuity, much like the Toxic.

Although clocked at 775 / 1125MHz, just under the Toxic's 800 / 1152MHz, the Ultimate more than pulls its own weight. With the HD3870's GPU and a passive cooler, the HD3870 Ultimate makes for the perfect video card for silent operation. This would benefit home theater systems and silent desktops.

All of our benchmarks were carried out in 64-bit environments, whether Vista Business, or Ubuntu 8.04. The Ultimate only trailed slightly behind the Toxic. I'm attributing this performance gap to ATI's Linux driver as discussed in the Linux section of the review.

Between the rock-solid performance and passive cooling, the Sapphire Radeon HD3870 Ultimate may very well be one of the best videocards on the market right now. Linux support for ATI cards is slowly improving, and only falls slightly behind AMD's former flagship 8800GTX card in Linux performance. We can't argue with the "Ultimate" moniker Sapphire bestowed upon this card.