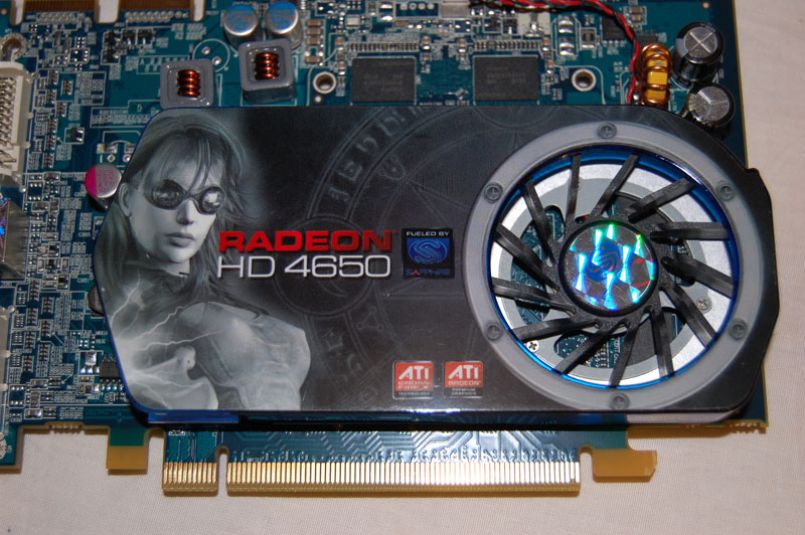 AMD recently unleashed the new mid-range videocards of the HD4xx0 series of the Radeon family of video cards. Unlike nVidia, who started their GeForce 9x000 series at the mid-range level, AMD is following the success of the higher-end Hd48x0 cards with several mainstream cards, including the Radeon HD4650 and HD4550.

The folks at Sapphire were recently kind enough to send us an overclocked sample of one of these mid-range cards, the Radeon HD4650. Sapphire's overclocked Radeon HD4650 features 512MB of GDDR3, 320 Stream processors, and a 700MHz memory clock. BIOSLEVEL.com will look at how this card fairs against its older brothers, as well as nVidia's mainstream offerings from the 9x00 family of GeForce cards.

The Radeon HD4650 shipped to us in a box roughly half the size of that of their high-end cards we've seen in the past. The card's title is printed nice and large, and a cute female with a rather large sword takes up the rest of the box's front side. Along with this are the various certifications, as well as Sapphire's improvements such as overclocked speeds and 512MB of GDDR3. 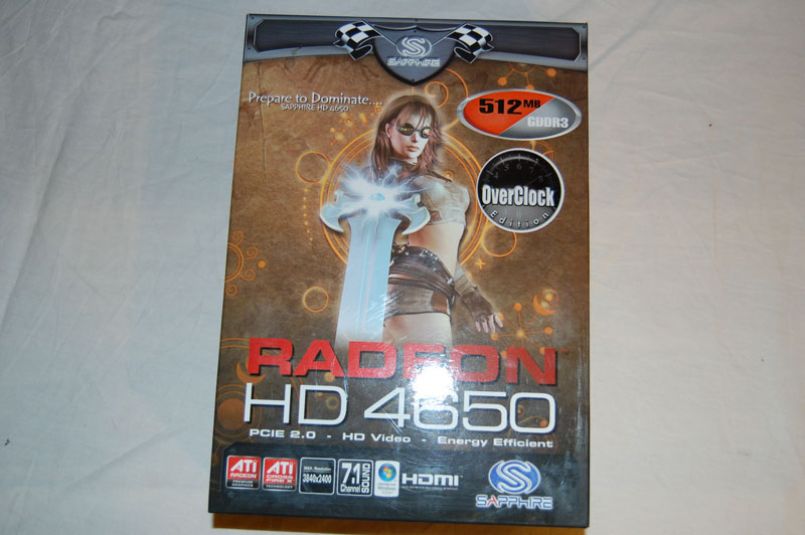 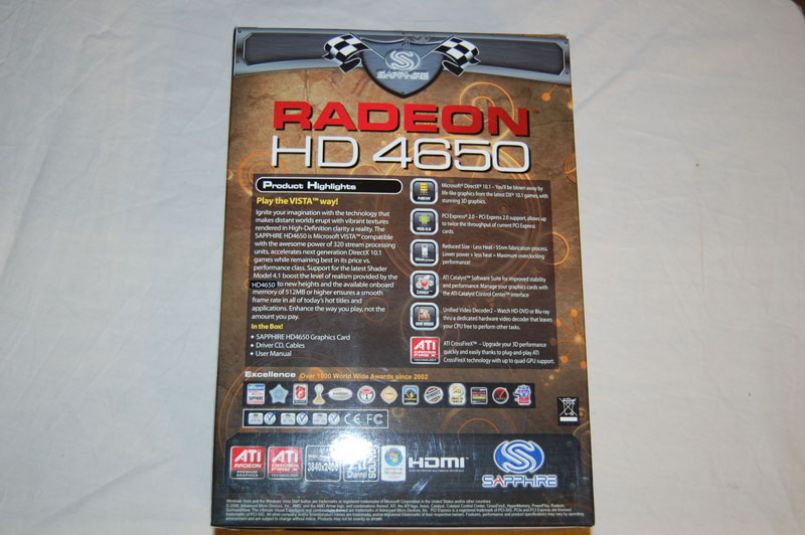 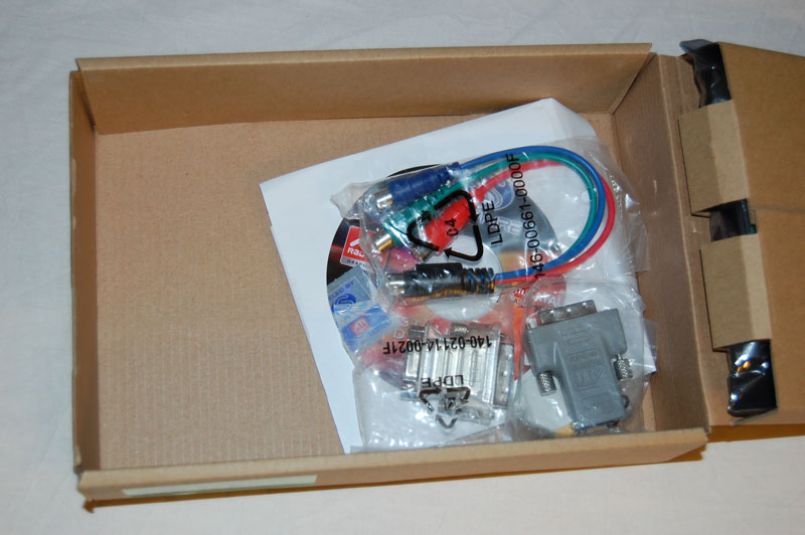 The card itself came wrapped up in the typical anti-static wrap. 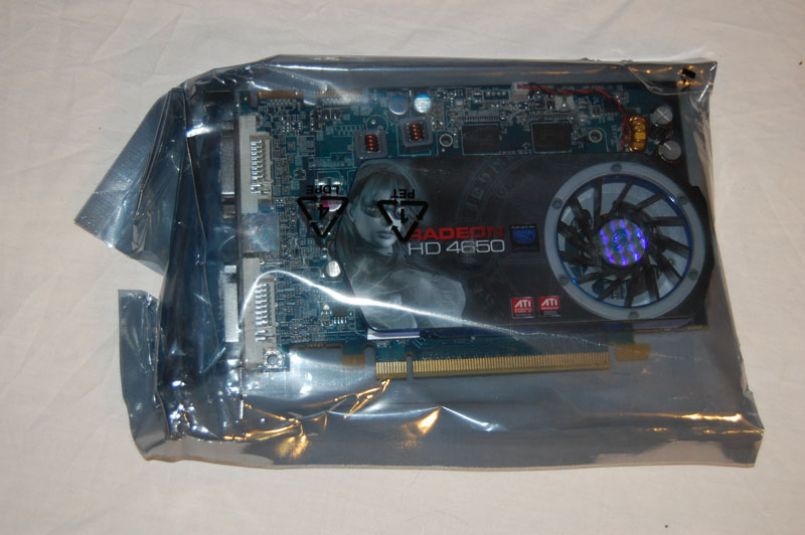 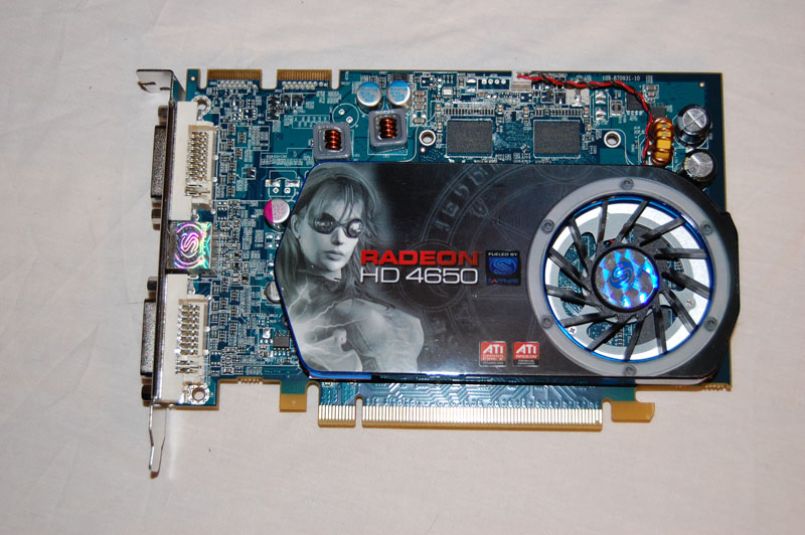 The card also neglects any VGA ports and instead features two DVI ports. I'd actually like to see some DisplayPort cards begin to be featured on today's graphics cards. 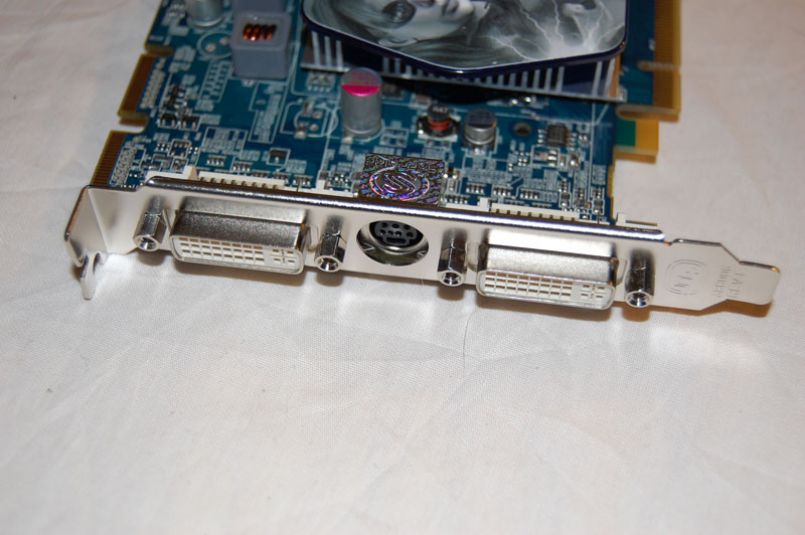 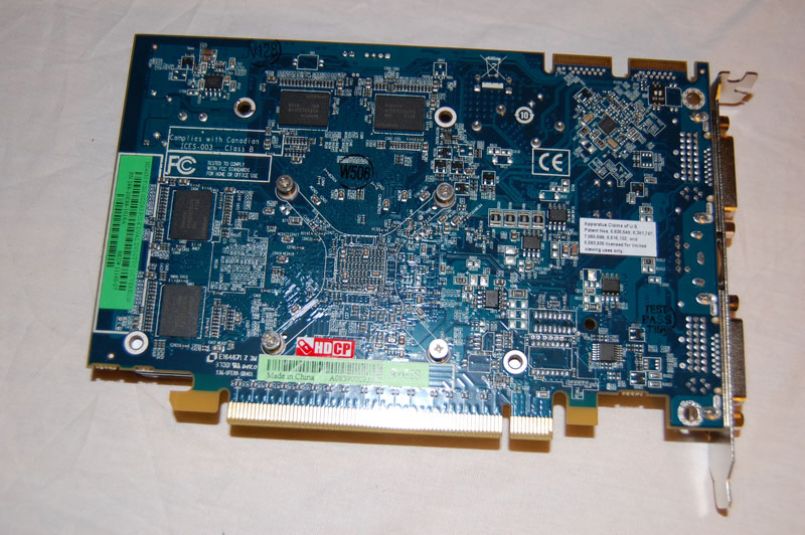 The Radeon HD4650 is also roughly three inches shorter than its older brother, the Radeon HD4850. 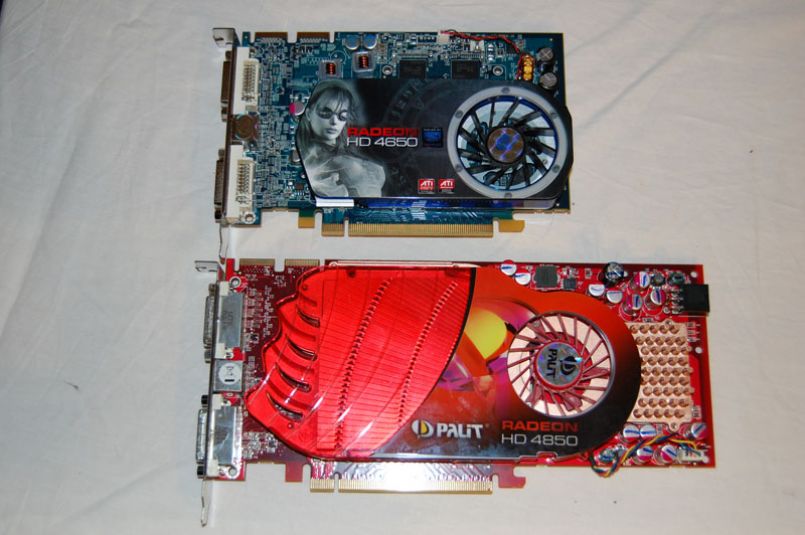 It's exciting to note that an audio signal can be carried across the DVI port, making for easy connectivity to HDMI receivers and televisions. Another high point is that the Radeon HD4650 can be used in CrossFireX, supporting up to four GPUs in the same system.

There wasn't much to the installation of the Radeon HD4650. The card merely requires an unused PCI-Express x16 slot, preferably of the 2.0 variety. I'm happy to report that the Radeon HD4650 does not require a PCI-Express power connection. This could be a killer card for many low-powered systems. 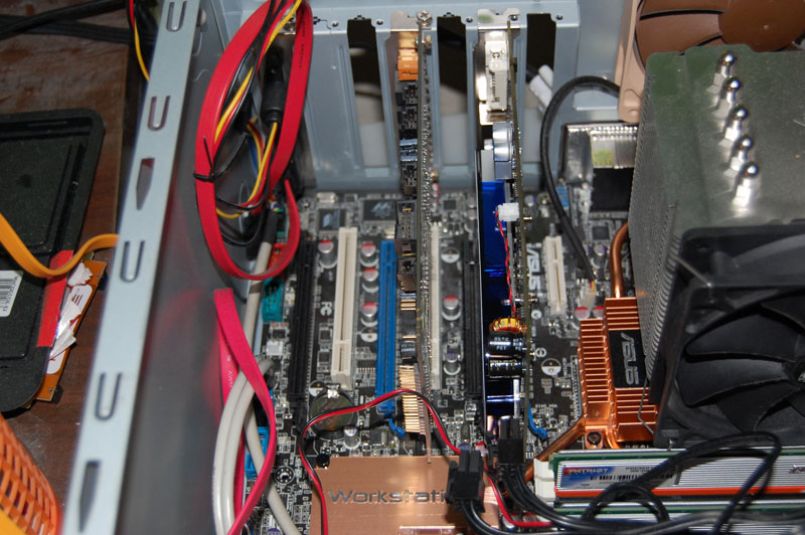 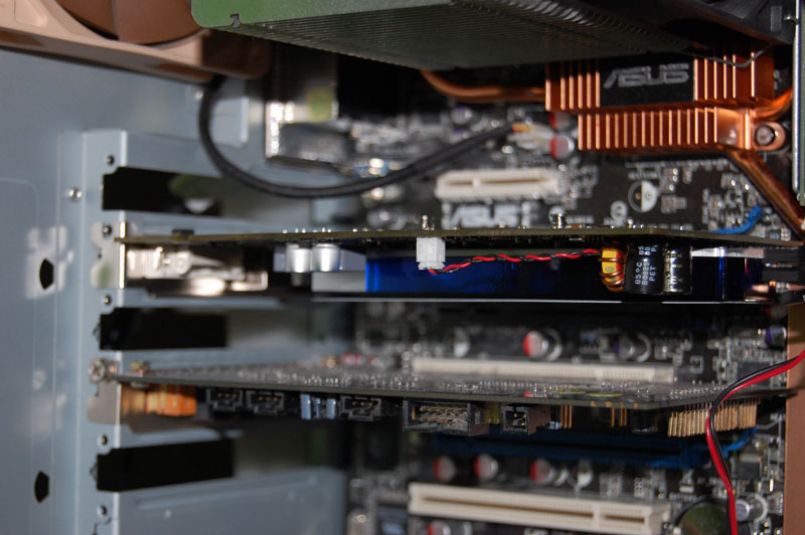 That said, I'll be able to compare the Radeon HD4650 against several videocards BIOSLEVEL has reviewed in the past, but I'll have to be careful with any conclusions due to the fact that I'm using different hardware. Let's get started with the Windows benchmarks. I'll be looking at performance in Cinebench, 3dMark06 and Vantage, Unreal Tournament 2004, Unreal Tournament 3, Crysis, Quake 4, and Half-Life 2. 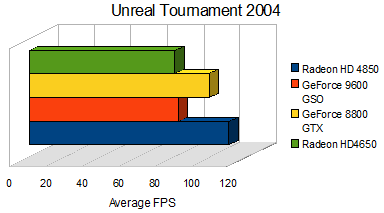 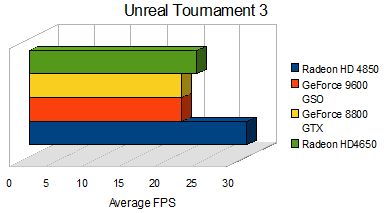 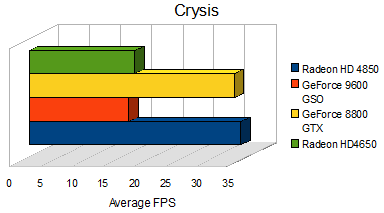 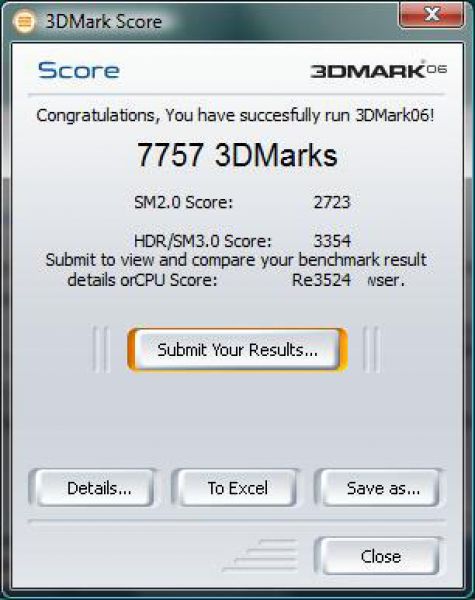 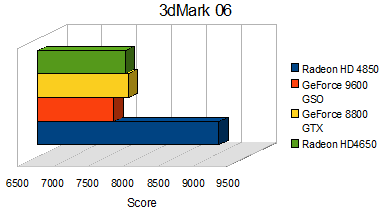 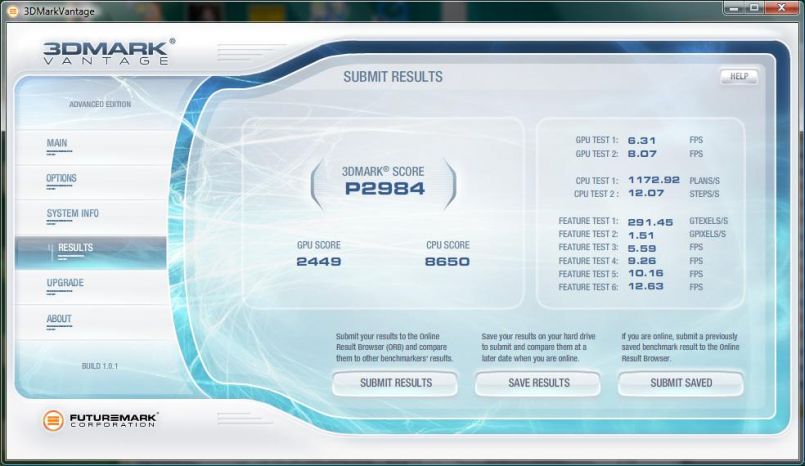 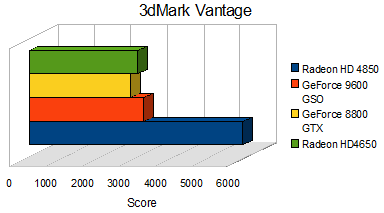 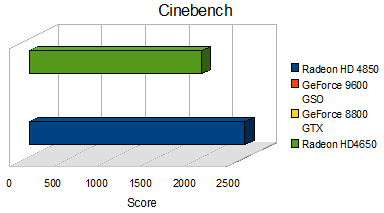 The results are both surprising and disappointing at the same time. I was surprised at the card's performance in Unreal Tournament 2004 and Unreal Tournament 3, but the scores from Futuremark's 3dMark benchmarks were significantly lower than those of the GeForce 9600 GSO.

Performance in Windows isn't horrible, and one must keep in mind that the Radeon HD4650 is priced lower than the GeForce 9600 in most markets. 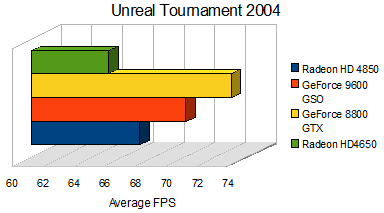 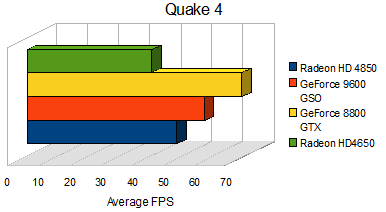 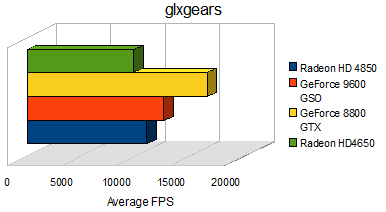 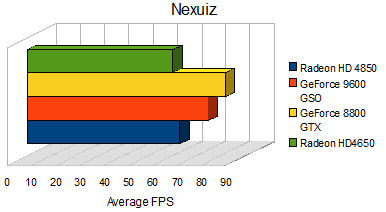 I have to say that the benchmark numbers in Linux came as a bit of a surprise. The card wasn't far behind the Radeon HD4850, but still fell behind the numbers we got from the GeForce 9600 and 8800 series cards.

As always, it's well known that that AMD's Linux driver isn't the best. For proof, once can compare similar games in bot Linux and Windows and see where the card falls behind in Linux. That's partially the purpose of the review to look at how well AMD has implimented their driver.

For a mid-range video card, the overclocked Sapphire Radeon HD4650 pulls its weight. At a reasonable form factor and pricing point, the Radeon HD4650 packs a punch. Consider the fact that up to four HD4650 cards can be used in parallel with AMD's CrossFireX technology to improve performance further.While the card did fall behind in performance to the GeForce 9600 GSO, the Radeon HD4650 offers a better pricing point, and also features some technologies not found in the GeForce 9600, such as DirectX 10.1 support.

Sapphire definitely has a great mainstream card on their hands with the Radeon HD4650 overclocked. With the overclocked memory and GDDR3, the card is sure to outperform vanilla HD4650 models, and should be able to play many of today's popular games at reasonable settings without giving up too much detail.