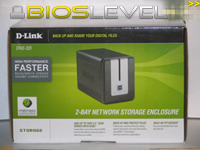 D-Link is one of the first companies that comes in to my head when networking is brought up in conversation. The company has a strong line of consumer products, but also have several products focused on businesses. BIOS LEVEL recently received one of its latest networking products, the DNS-323 Network Attached Storage (NAS) enclosure.

The DNS-323 is suitable for home or small office use, and shares files via Microsoft's Samba protocol, or FTP. This makes it an excellent choice for a network with several different operating systems on it. Adding to the foray, the DNS-323 supports two SATA drives in individual or RAID operation, and connects via gigabit ethernet to a network for faster speeds.

I was surprised at how large the box for the DNS-323 was as compared to other storage enclosures. The front had a large picture of the enclosure itself, as well a quick list of all the immediate features I want to see from this device. The rear of the box, however, displayed a quick-install diagram, showing how to insert and remove drives from the enclosure. Looks pretty easy to me. 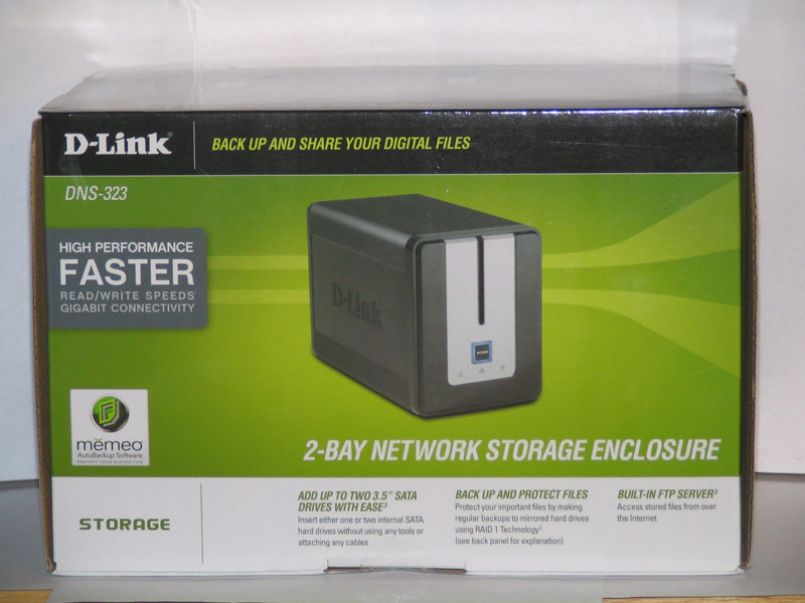 Opening the box, I found that everything was packaged between two egg crates. This seems like much higher quality packaging than some of your typical cheap-cardboard holders. The enclosure was the first thing in the box, wrapped up in plastic. 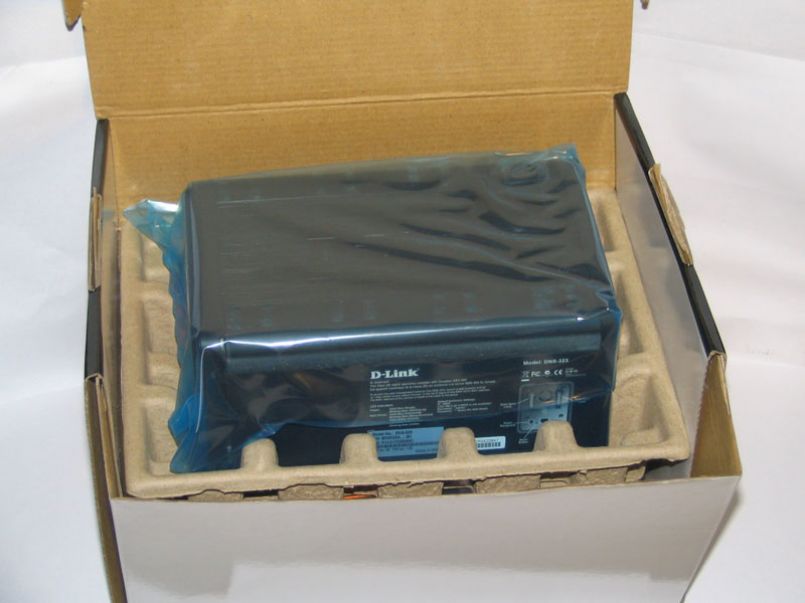 Under the enclosure were the other necessities: directions, warning labels, an ethernet cable, and the power supply. With everything unpackaged, let's take a look at the enclosure itself.

After unpacking the enclosure, we're left with a big orange sticker on the front explaining how to insert the drives: slide the front bezel up and slide the drives in. Much like a PC, all of the ports are on the rear of the case. There's an eSATA power port, although I did not test it with a normal eSATA power supply, so don't take my word on this. There's also an ethernet jack and USB port. The enclosure utilizes a gigabit connection to ensure the best transfer speeds over the network, and the USB port is meant for use as a print server. Not only is the device at a network drive enclosure, but also a print server. 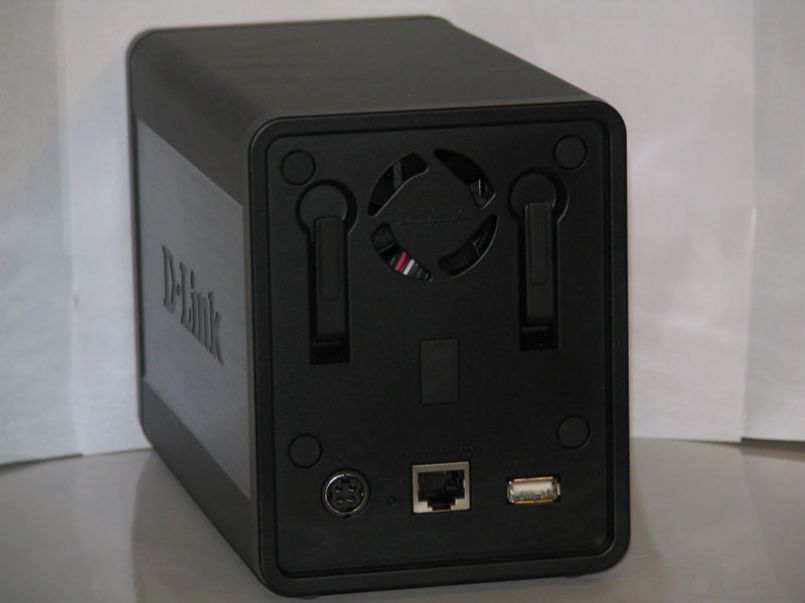 After sliding the front bezel back on, hooking up the power supply, and jacking in to my Dell gigabit switch, I was ready to roll.

Using the CD which D-Link provided with the enclosure, I launched the "D-Link Easy Search Utility", which scans your network for the enclosure. Upon finding it, I clicked "Configuration" and a browser window launched. In the browser window, I met the DNS-323's web interface. Provided I have the means of finding the enclosure's IP address, you do not need the D-Link utility. I'm able to access the web interface from Linux or Mac just the same. 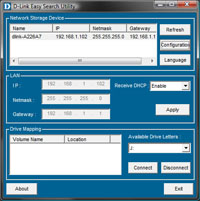 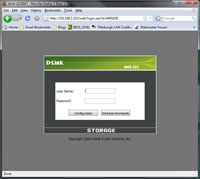 On first time use, I opted to use the configuration wizard in the web interface. It's possible to configuration all these settings on their own, but I figured the wizard was a good way to learn about all the features. In the first step, I was given 4 choices on how to configure my disks, then how to partition them. After formatting was complete, I was surprised to discover that the partition I had created was running the EXT2 filesystem, which is a Linux filesystem. I didn't realize up until this point that the DNS-323 was running Linux! Continuing the wizard, I was given choices for an administration password, as well as my timezone. And the wizard concluded with network settings and naming schemes. It's probably a good idea to set the device's IP address as a static IP instead of dynamic. This will remove any issues when DHCP leases expire and the IP address changes. Heading back to the main web interface, I was able to enable an iTunes server, an FTP server, as well as add users and groups for different folders and partitions on the enclosure. All these extra features made the drive feel much more Linux-like than I'd realized before. I did wonder if there was an open SSH or Telnet port.

After configuring the device to my liking, it was time to mount the drives and and test the speed.

Using D-Link's utility, I'm able to discover the DNS-323 on my network. The utility also lists the available shares on the drive, and gives you the ability to map them to a drive letter in Windows. As long as you don't remove this drive letter, Windows will reconnect to the drive each time on startup.

Since the device is using the Samba protocol to share files, it's easy to mount the shares from Linux or Mac just as well. In OS X, I was able to enter the DNS-323's IP address in Finder and mount shares that way. In Linux, I had a few options. Konqueror can browse Samba shares, so I was able to access the different shares. However, I wanted a more permanent option, so I added a few lines to one of my startup scripts.

The drive actually uses the CIFS protocol, which is an improved version of Samba. It works much the same, but doesn't have some of Samba's limitations. Mounting is simple:

With the DNS-323 shares now accessible, I decided to run a few speed tests to see how efficient the device was. The first test I ran was copying a 700MB file from my computer's 36GB Raptor hard drive to the device, and then back. I repeated this test for RAID0, RAID1, and individual configuration for the device to see how the speeds changed. These tests were carried out from both Linux and Windows, and the speed difference was indistinguishable.

Following this, I also benchmarked the device using its built-in FTP server using the same parameters.

Let's examine our results on the next page.

Following my benchmarks, it's safe to conclude that the device's Samba implementation is much speedier than the aging FTP protocol. Write speeds were slower than read speeds, which I somewhat expected. Writing to a drive it always slower than reading from the drive. Using HDTach or hdparm tells us that the individual drives are capable of read and write speeds exceeding 40MB/sec. Even with a gigabit connection to the device, we are seeing speeds around 30% of this.

One solution may be the device's processor. Linux' implementation of Samba is often benchmarked at speeds beating those of Windows, but it can be limited by processing power. The DNS-323 is running on a 500MHz ARM Processor, which is a likely cause of these speeds. A possible fix to this would be to use a Via C3 or C7 CPU, which also require very little power to operate, but would offer better performance. Another solution is that neither the drive, switch, or host computer are using the full bandwidth offered by gigabit. This means using jumbo frames and more. Sufficient to say, gigabit networking is something we will want to explore further in the future.

Despite running Linux, the device does not run an SSH or Telnet server on it. After some research, we found that there are hacks out there that will enable these services, but they go beyond the scope of this review (and is an exercise remanded to the reader).

Overall, I found the DNS-323 Network Attached Storage enclosure to be a very flexible device. Being able to run two drives in a RAID1 formation provides an excellent back-up solution whether the device is used from home or the office. Although we found the transfer speeds to be somewhat mediocre, the device definitely pulls its own weight with a full range of services offered such as iTunes and uPnP servers.