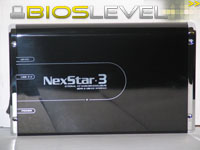 Normally, when I hear the name Vantec, I think of PC thermal solutions. This is because it had one of the fastest 80mm fans on the market several years ago, the Vantec Tornado. Nowadays, however, Vantec maintains a wide range of peripherals offering the best in terms of thermal cooling. Today, we're going to be looking at the NexStar 3, their hybrid eSATA/USB2.0 hard drive enclosure.

The Vantec NexStar 3 combines eSATA and USB2.0 connections with a light aluminum chassis, sure to keep your drive cool while ensuring compatibility between your machines. The enclosure holds a single 3.5" hard drive, and even features and LED-lit logo on the front to show that the drive is powered.

The NexStar 3 comes in a glossy box. There are full feature and benefit lists on the rear of the box, and system requirements and contents on either side of the packaging. The box opens from the side so you can pull out a box containing the actual product. 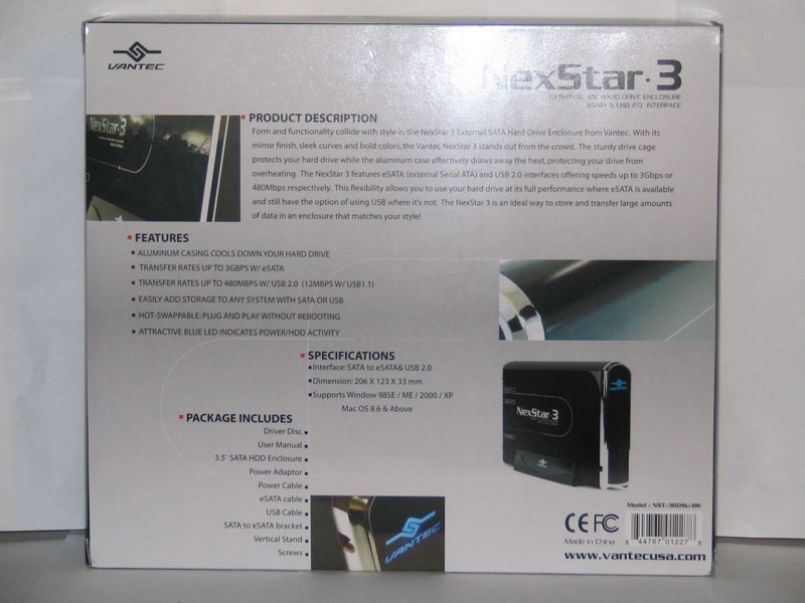 The enclosure itself comes in your typical cardboard packaging that holds all the accessories, including the power adapter, USB and eSATA cables, and vertical stand for the enclosure. Also included in the manual packaging is a PCI expansion bay bracket which converts an eSATA jack to an internal SATA connector, removing the need of an additional SATA controller that has it's own eSATA jack. 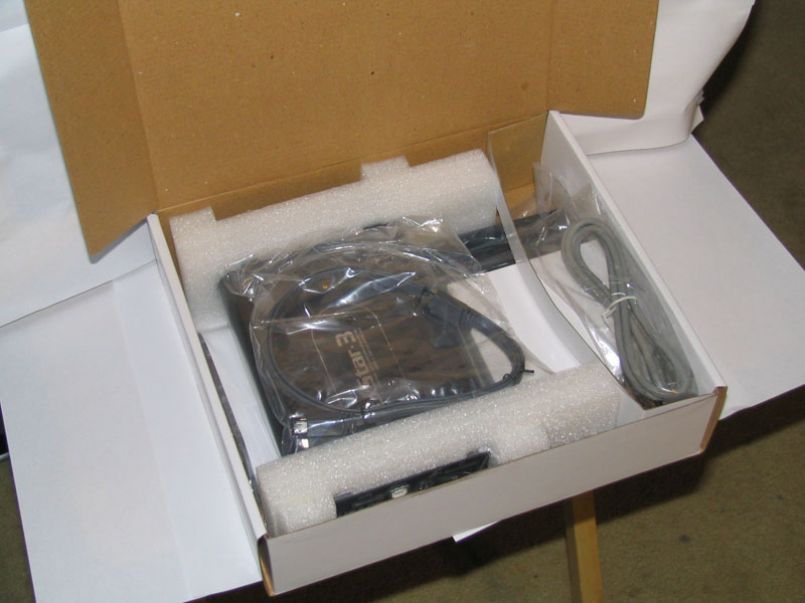 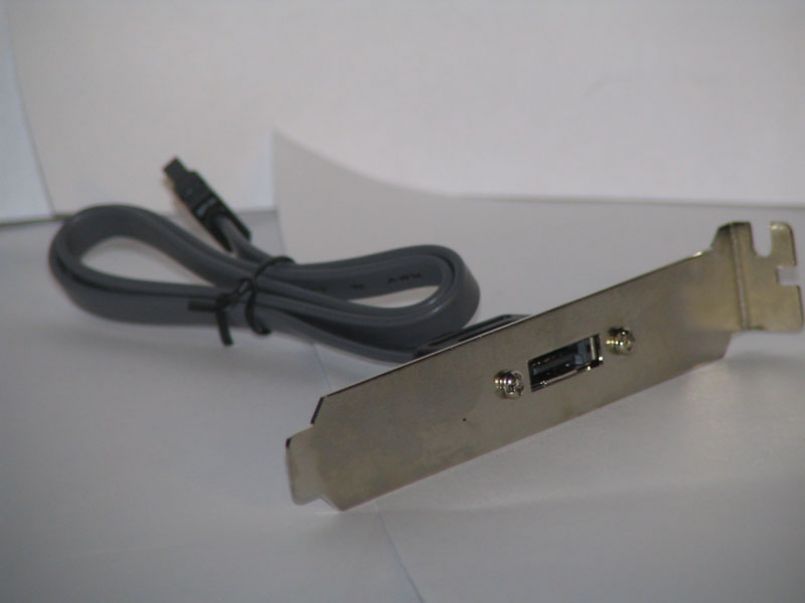 I received the black version of the NexStar 3, and I was surprised at the simplicity of the case. No outstanding designs in the aluminum casing, no super-giant-colorful logos on the sides. The case is nice and simple, but offers a very aesthetic appearance suitable for almost any environment. 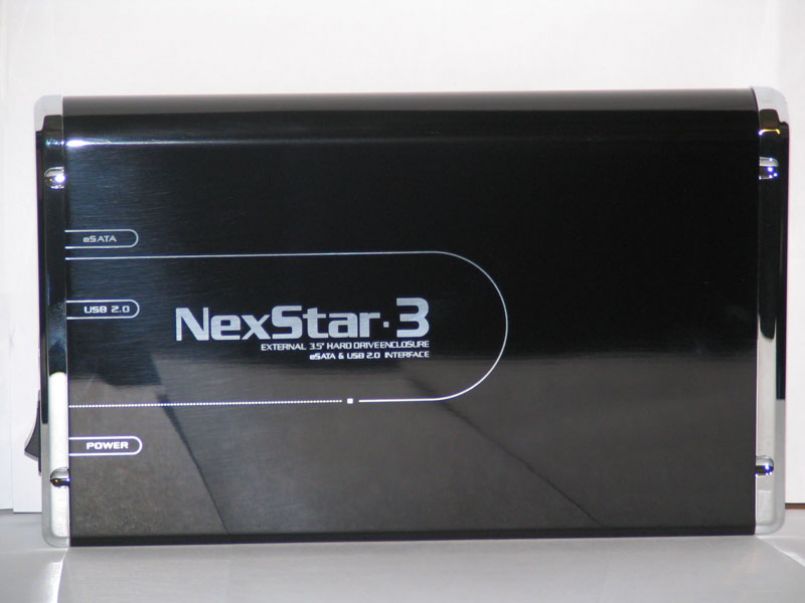 The NexStar 3 does not come with, nor does it need, a fan. I think Vantec seems fairly confident that the aluminum body will dissipate enough heat to keep the internal drive at a safe temperature. On the front, however, is a light-up Vantec logo. The light is an LED, so a very trivial amount of heat is emitted. 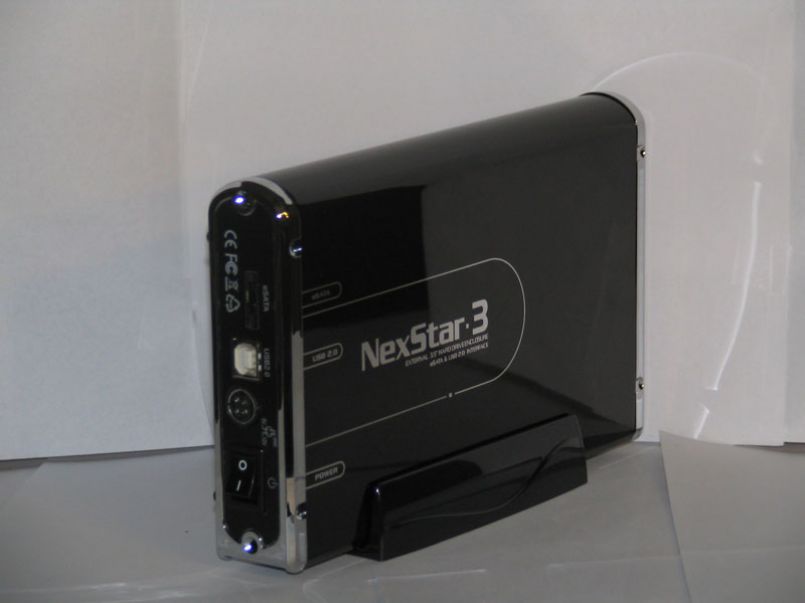 The rear of the enclosure is the fun part. We find both eSATA and USB jacks (one of each), as well as the power switch and a power connector for the unit's external power supply. Also on the back are the screws that hold the drive sled in the enclosure. Let's take out the screws and sled out so we can install our drive. 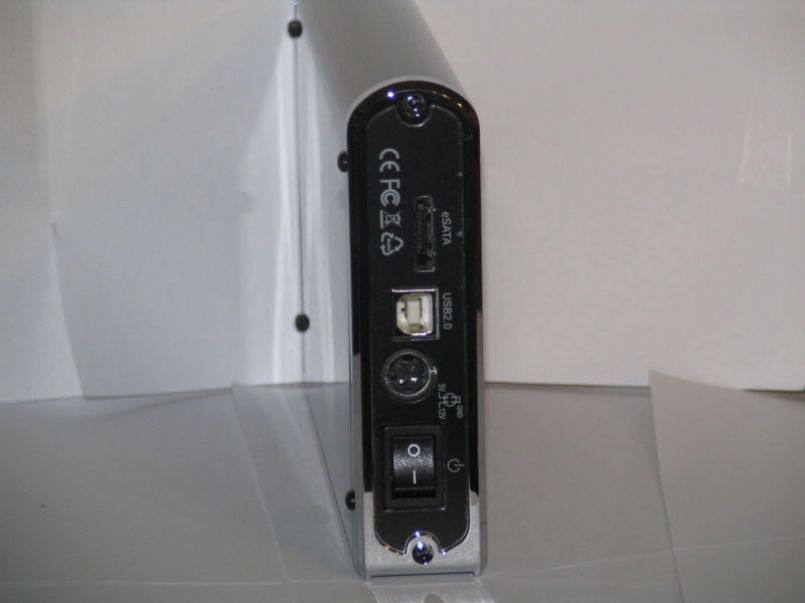 After removing the screws, the drive sled slid out without having to use any force, but felt solid enough that it wouldn't vibrate too much with a drive inside. The sled consists of the rear of the case where the jacks are, and two rails extending from it where the drive connects to. 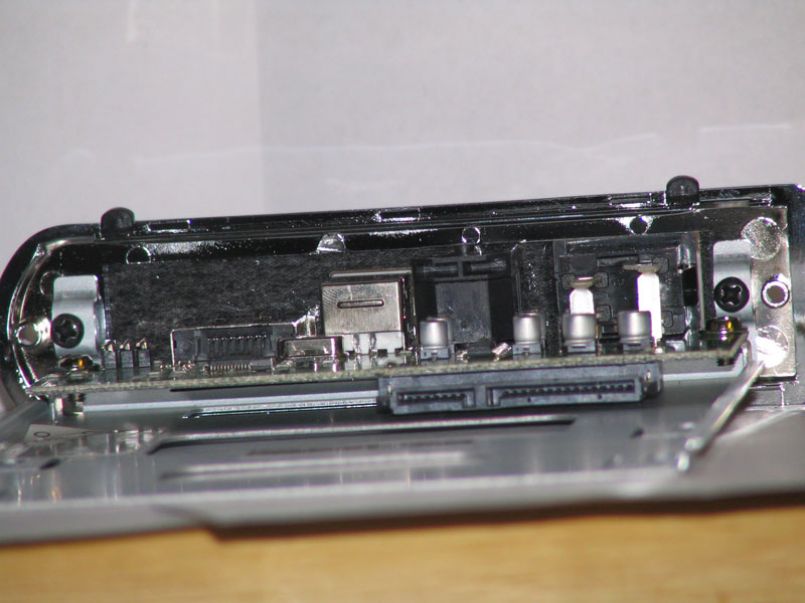 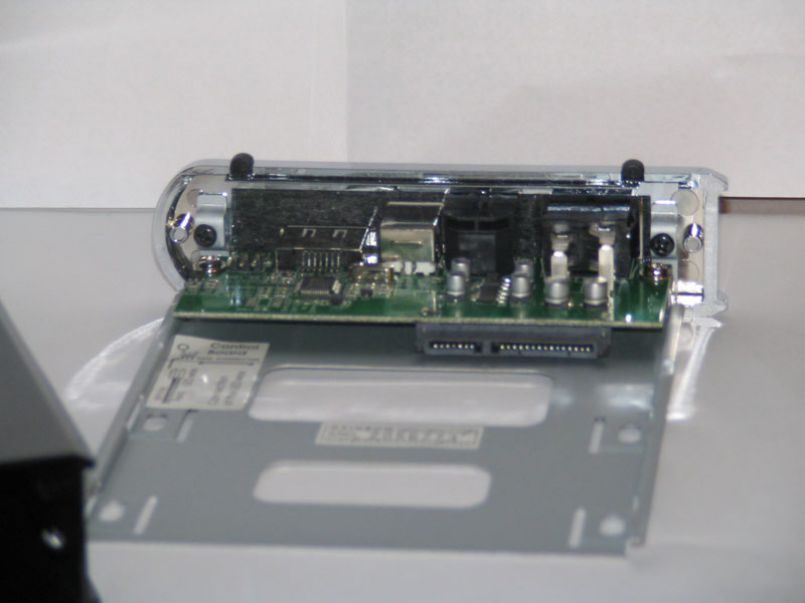 Slide the drive along the rails and make sure the drive's SATA connectors are aligned properly with the enclosure's connectors. Vantec provides screws to screw the drive to the rails, but I was slightly surprised at the lack of any rubber grommets to keep the drive a little more silent.

After all this is done, make sure the 2-pin connector is connected to the PCB board, as this is what controls the Vantec LED on the front of the case. Slide the sled back into the case and secure it with by putting the screws you removed back in. 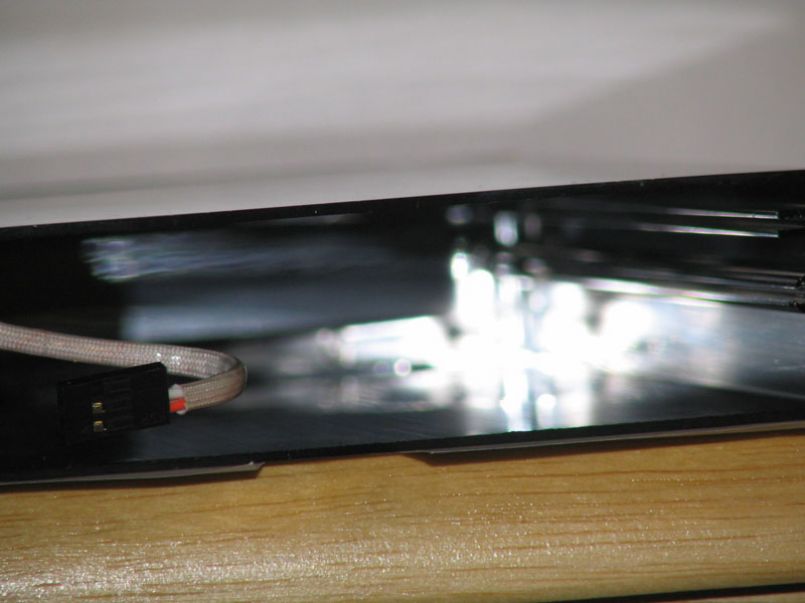 I have a rather large desk, and I don't think I could get a much bigger one with getting an L-shaped desk or switching to a folding table. As such, I really don't have room for an external drive in plain site, so I've opted to sit it behind my monitors. The desk itself is hardwood. After plugging the drive in with the eSATA cable and powering it on, I could feel my desk vibrating any time I laid my arms against it. Worse, if all my drawers are closed, the vibration becomes slightly audible! If I'm going to keep this drive where it is, I'm going to have to find some sort of rubber or foam mat to put under it to prevent these vibrations.

eSATA is only an extension of internal SATA, where on the cable has been modified to allow for external use. This means that the drive will work fine in Linux or Windows provided the SATA controller is supported. Similarly, the enclosure can also use a slower USB connection which is supported by both Linux and Windows as well. 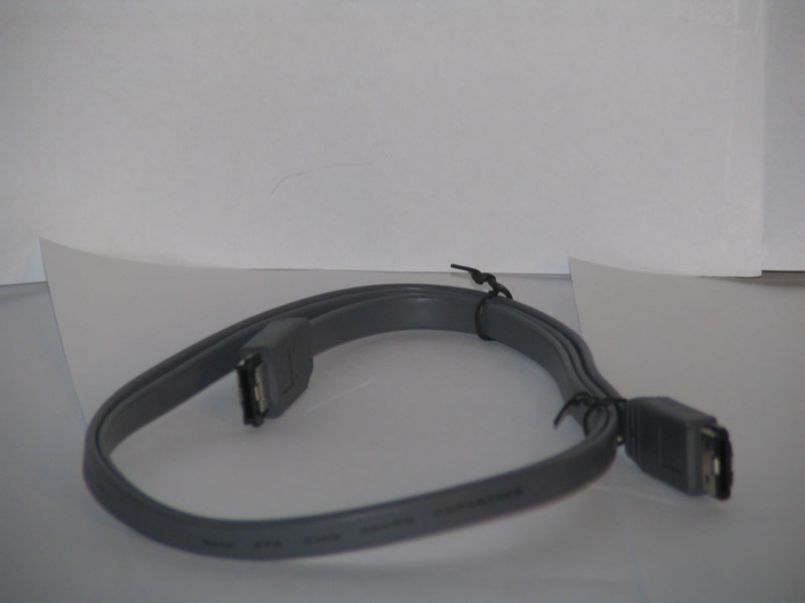 For testing, we'll be using a Rosewill-branded SATA controller. This controller is only of the SATA I variety, and therefore we're going to test a SATA I controller. SATA I has about half the theoretical bandwidth that SATA II has, but we shouldn't see a major gap in performance. The tests will be performed on our Intel Quad Core Q6600 machine with 2GB of RAM.


As it can be surmised from our table, there's little difference on whether you use the SATA drive through an internal SATA connection or external SATA connection, as the speed remains constant. However, when you switch to the USB connection (maybe for a laptop, or lack of an eSATA port), you will see a drop in performance. I was surprised at the equal read/write speeds for the eSATA and SATA connections, it seems a little odd. Writes should be much slower.

Our final test involved the heat given off by the drive. As the enclosure does not have a fan, we were worried about the heat that may build up in the enclosure if the drive was used for an extended period.

I wrote a simple Linux shell script to continuously copy our 700MB file to the drive 100 times. In total, this took about a half hour to complete. When I touched the enclosure anytime during the test, the enclosure still felt cool to the touch. Imagine the power of an aluminum enclosure! Of course, I'm sure some drives with larger caches or faster RPM will warm the enclosure up much more.

The eSATA connection does not hinder drive performance at all, which may or may not surprise some. Many people are used to USB's slower speeds, but this isn't the case with eSATA. You'll get the full SATA experience through an eSATA connection.

While the enclosure does not have a fan, we found that a fan would be unnecessary, as the aluminum chassis does a fantastic job of dissipating heat. Even after 30 minutes of continuous use, the enclosure remained cool to the touch. The one downside to this enclosure is that it does not do anything to dampen the vibrations from the hard drive within. Even when the drive is not being used, I can feel the drive vibrating my wooden desk.

Aside from this single shortcoming that we found, the Vantec NexStar 3 is a fantastic external enclosure.