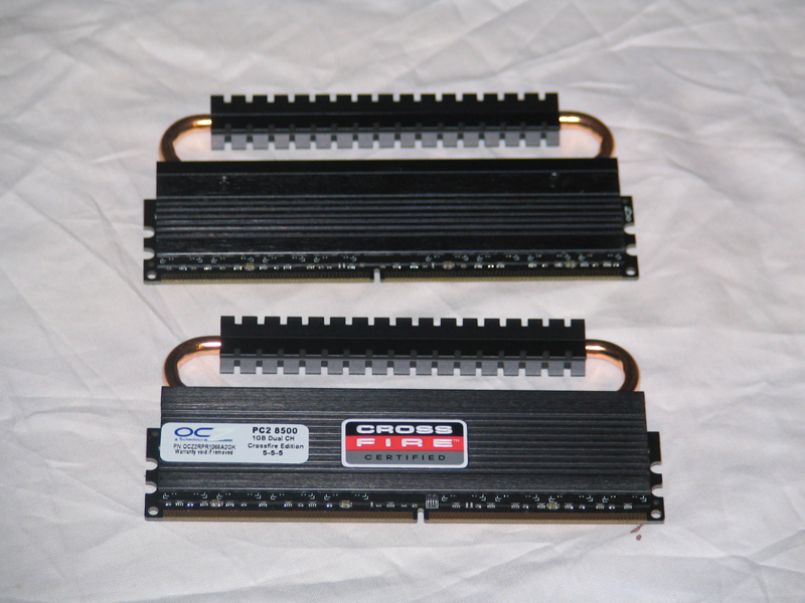 In our reviews of the Sapphire 780G Motherboard and Hybrid CrossFire and Sapphire ATI Radeon HD3870 Toxic, I used a 2GB DDR2 PC2-8500 Reaper HPC CrossFire Certified kit (OCZ2RPR1066A2GK) provided by OCZ. Although DDR2 prices are lower than ever, it's still easy to pick out the good brands from the bad.

The 2GB DDR2 PC2-8500 Reaper HPC CrossFire Certified kit is no exception. Featuring an advanced heat pipe technology (the HPC part of the name) to cool the RAM and 5-5-5-15 timings, the kit made for an impressive performance in our previous two reviews. The kit is also CrossFire certified by AMD, providing for superior performance when compared against other DDR2 RAM when used with a CrossFire system, such as we did with the Sapphire 780G motherboard.

The Reaper HPC RAM was shipped in a plastic casing, something like what you would find handing from the walls in a toy store or at the checkout in a grocery store (I wish I could buy my RAM at the grocery store). 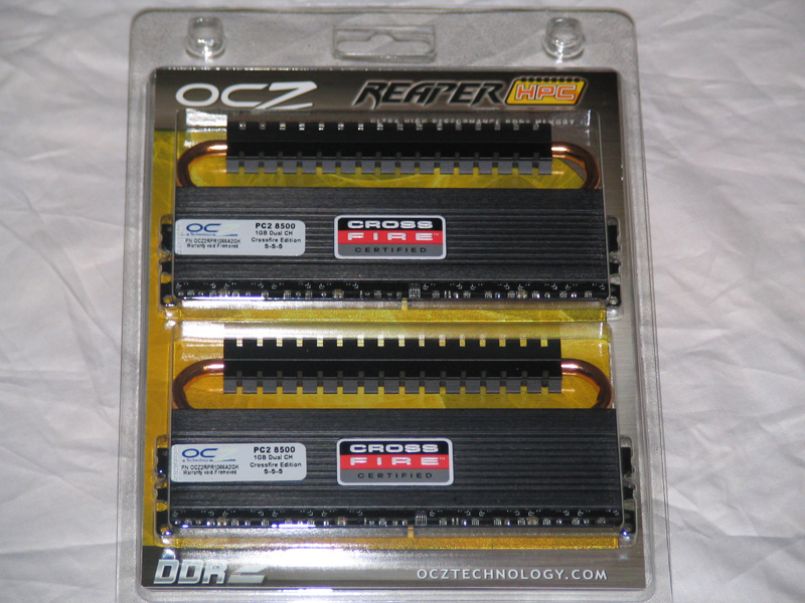 The heatsink on the RAM is unique to OCZ. While other brands may feature heatpipes, the overall design is very unique and, as I'll hopefully find out, much more effective. The heatspreader and fins are both made from aluminum, while the pipes are made from copper. AMD's "CrossFire Certified" logo is also prominently featured on both sticks of RAM. 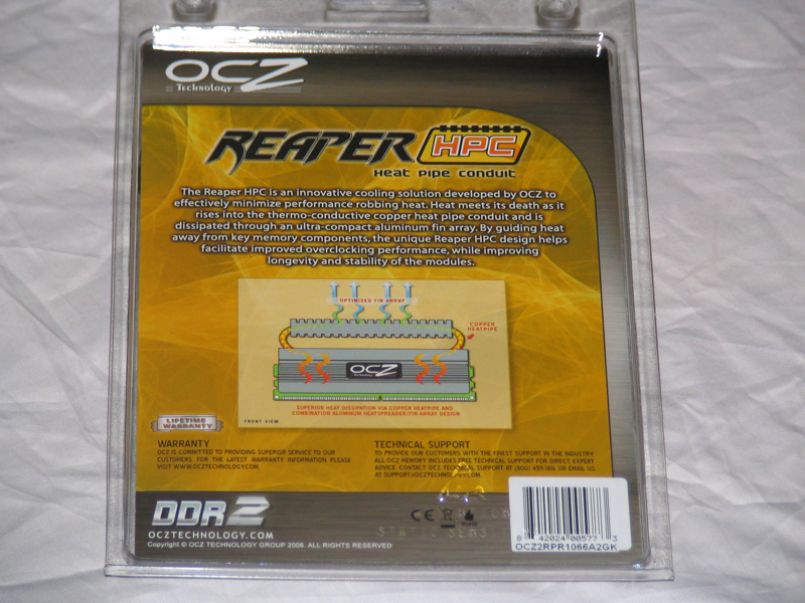 The rear of the packaging provides a diagram and description of how the thermal solution works. However, there's no real mention of the unit's performance or CrossFire certification.

Unfortunately, the Reaper HPC RAM may cause a bit of a clearance issue on some motherboards depending on how close the RAM is to the CPU or CPU Cooler. In the case of Sapphire's 780G motherboard, the RAM slots were far too close to the CPU cooler and I was only able to use the two farthest away with the Reaper HPC's height. The Reaper HPC RAM is quite sturdy, and I felt not give when pushing down against the heatpipes or fins. They're solidly built units. 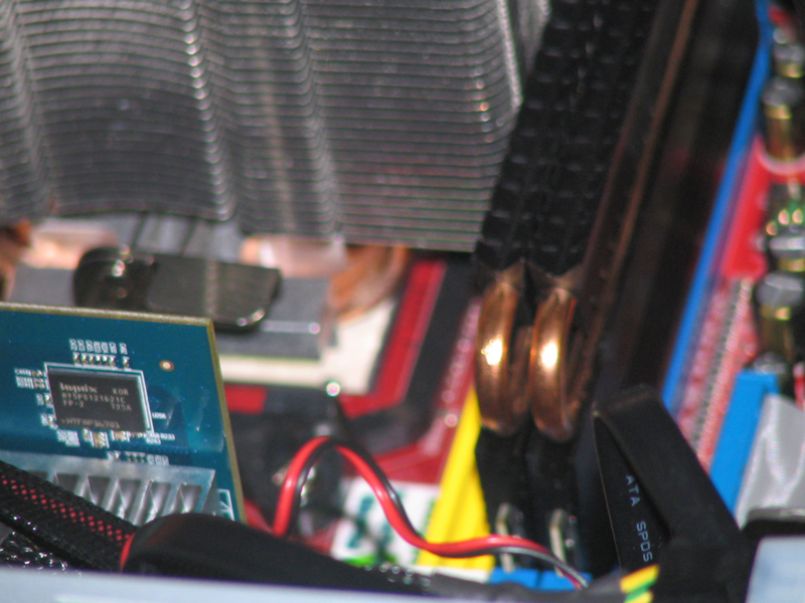 Installation was a snap, so next up is looking at how the unit's perform.

Let's move along to look at Windows performance first, followed by Linux performance. Utilizing the HD3450 and 780G motherboard in a CrossFire configuration should ideally give the best results for this RAM.

In Windows, I'd like to cover several benchmarks and areas of usage that the RAM may give some benefit or performance gain in. For comparison, I'll be using 2GB of Crucial's Ballistix Tracer DDR2-800. I'll also be using the 64-bit version of Windows Vista for these benchmarks.

The better set of RAM, if there is between these two pairs, should provide higher scores in productivity, multimedia, and gaming benchmarks. In this case, I'll be looking at a multitude of benchmarks: PCMark Vantage, 3DMark06, the SiSoft Sandra Suite, Unreal Tournament 2004, and Unreal Tournament 3. PCMark Vantage is Futuremark's latest release of the PCMark series, sharing the new "Vantage" brand much like the latest 3dMark release. PCMark Vantage aims to benchmark every aspect of PC usage, from gaming, to office productivity, to multimedia creation and viewing. Unlike 3dMark Vantage and 3dMark 06, however, Futuremark released a 64-bit version of PCMark Vantage, finally giving us a native 64-bit benchmark. The Reaper HPC earned a gross score of 2814, while the Crucial Ballistix came in at 2794.

Sandra offers various benchmarks for looking at the performance of a system. For this system, I chose to look at cache and memory performance, memory latency, and memory bandwidth. The Reaper HPC is on the left, while the Crucial Ballistix is on the right. 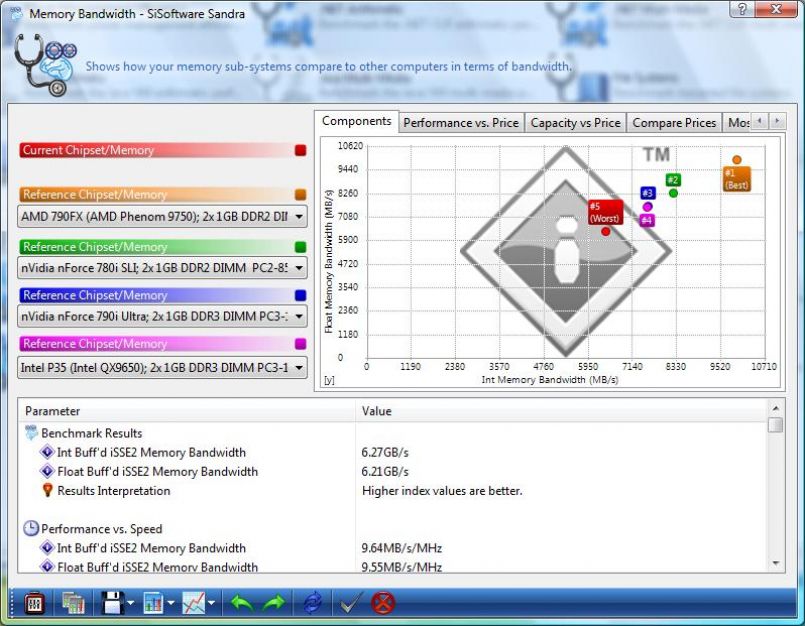 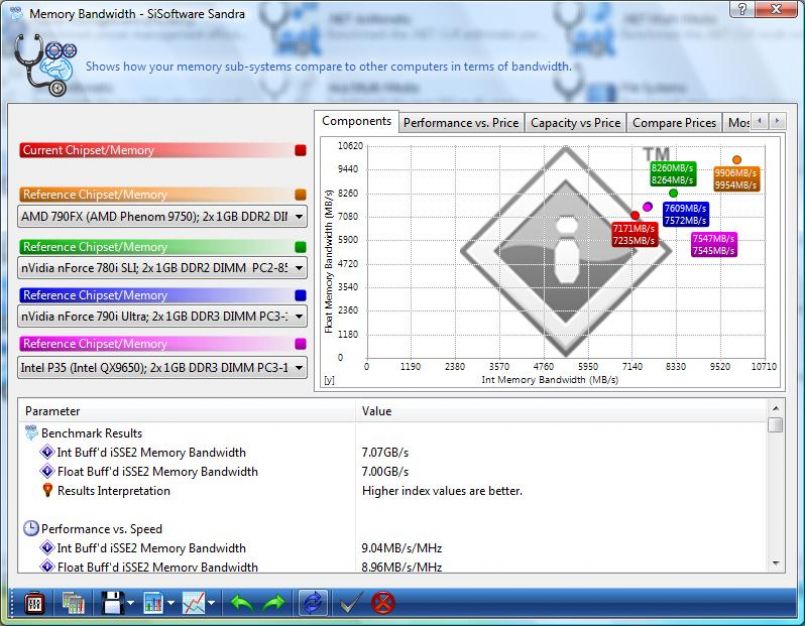 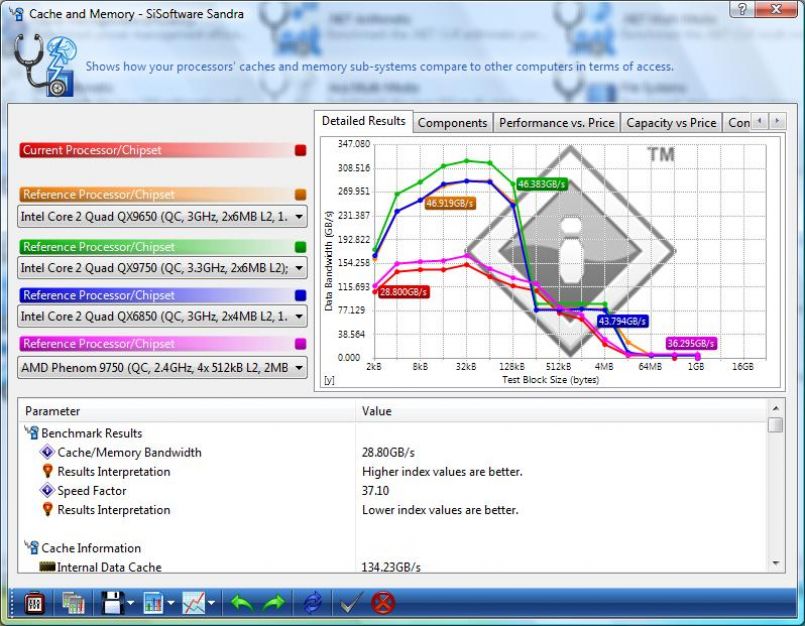 Futuremark has yet to release a 64-bit edition of any gaming benchmarks, so I was expecting to see low numbers using this setup in a 64-bit environment. Unfortunately, neither the GeForce 6150 or 780G motherboards were able to run 3dMark Vantage, so I've settled for only showing results for 3dMark06. 3dMark06 was run with default settings with all tests selected. Again, the Reaper HPC is on the left, while the Crucial Ballistix is on the right.

On the previous page of this review, I looked at a few benchmark suites, made to give a well-rounded view at the hardware I'm dealing with. In this second page, I'm going to look at three games rather than benchmark suites and see how the RAM performs.

As I've said previously, UT2004 is my default benchmark for several reasons:

Thusly, I'll once again be looking at performance in UT2004. The benchmark consists of a botmatch on DM-Rankin with all the settings on low. 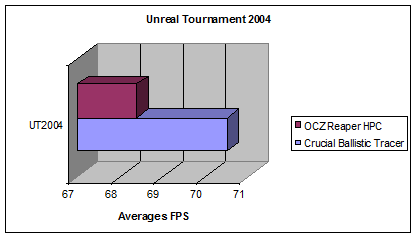 Battlefield 2142 is the latest incarnation of the Battlefield series that began with Battlefield 1942. It's based on the same engine as Battlefield 2, with some upgrades. I don't expect it to play well on this hardware, even with CrossFire enabled. I've created a custom timedemo on the Wake Island 2142 map. The game is running with the lowest details possible at 1280x1024. Let's take a look. 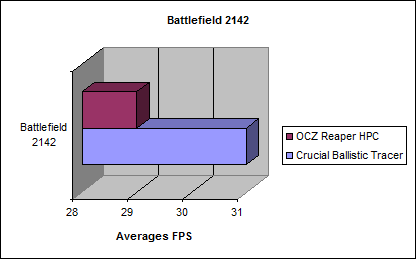 It's difficult to find a clear-cut winner between the two RAM kits. In PCMark Vantage, the OCZ Reaper HPC scored a mere 20 points higher than Crucial's Ballistix Tracer. On the other hand, Crucial's Ballistix Tracer beat the Reaper HPC in 3DMark06 by a mere 44 points. There's no way to declare a winner between these two benchmarks alone. It is to say, however, that OCZ's RAM definitely means business.

In my benchmarks taken from the Sandra Benchmark Suite, it's clear that Crucial's Ballistix Tracer has a small advantage over OCZ's Reaper HPC. The Reaper HPC falls just behind of the Ballistix Tracer, with a slightly higher latency and slightly slower bandwidth. Again, these results are some negligible because the scores are so close. If I looked at a generic or value-series RAM kit, we'd probably see a much bigger difference in performance. Both of these products are meant to be high-end.

Up until now, many of the benchmarks are very much synthetic, looking at theoretical performance, or what performance should be. Our benchmarks in the realm of gaming is what I want to look at, as the RAM is meant to benefit CrossFire-enabled systems. The only game the Ballistix Tracer performed better in was Unreal Tournament 2004, and only by a margin. The OCZ Reaper HPC proved to be the better choice in both Unreal Tournament 3 and Battlefield 2. The largest difference was in UT3, probably where the Hybrid CrossFire was utilized the most.

In Windows, the 2GB DDR2 PC2-8500 Reaper HPC CrossFire Certified RAM kit performs on-par with some of the fastest DDR2 RAM we've tested, and even proves to be measurably faster in Unreal Tournament 3.

Unfortunately for our Linux tests, CrossFire isn't supported in Linux yet. In this case, I shouldn't see any major benefits from the RAM aside from just being a better option, if it is. In the case of Linux, I'm going to look at Unreal Tournament 2004 performance, as well as several benchmarks from the Phoronix Test Suite such as Nexuiz, Audio Encoding, and gzip compression.

All benchmarks are being conducted in Ubuntu 8.04 64-bit.

Unreal Tournament 2004 has native versions in both Linux and Windows, making for a great way to compare the game between different operating systems. The benchmark was once again run as a botmatch on DM-Rankin. 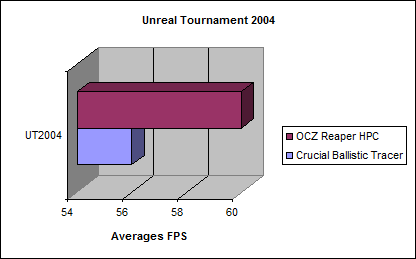 The Phoronix Test Suite has a great benchmark for Nexuiz. After running a simple CLI command, a Nexuiz botmatch opened. The benchmark collects the average FPS. Another great feature the Phoronix Test Suite has is the ability to benchmark the compression speeds of several audio formats as well as gzip. A faster set of RAM should lead to faster compression times. Much like in Windows, I can't define a clear-cut winner. Both kits have their wins and losses in our benchmarks. It's best to say that the two sets of RAM keep up with each other, telling me that OCZ's CrossFire-certified Reaper HPC memory is a fantastic choice in RAM regardless of whether or not CrossFire is thrown into the mix.

With DDR3 slowly becoming mainstream, DDR2 will eventually be phased out in the next year or so. Despite this, DDR2 is still going strong. OCZ's CrossFire-certified Reaper HPC 2GB kit kept pace with a 2GB kit of Crucial's Ballistix Tracer RAM I previously reviewed.

In Windows, results were mixed. In some areas, the CrossFire-certified Reaper HPC memory fell just behind Crucial's offering in some tests. However, in Unreal Tournament 3, a game that benefits from CrossFire more than others, the Reaper HPC came out a clear champion.

Results were similar in Linux, except in Unreal Tournament 2004, where the Reaper HPC also took the performance crown. This was an ironic situation, as Crucial's Ballistix Tracer was faster in UT2004 in Windows.

Through all the benchmarks, the conclusion comes as being that OCZ's OCZ2RPR1066A2GK 2GB DDR2 PC2-8500 Reaper HPC CrossFire Certified RAM kit is a performer. It keeps foot with one of Crucial's flagship RAM kits, and definitely gives the performance I like to see from my hardware.