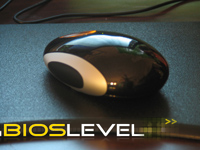 Saitek was founded in 1979, and entered the PC gaming controller market in 1993. All these products are designed by gamers for gamers, to help them get the best out of their favourite PC games. Today we'll be looking at their Obsidian Wireless Mouse, which they claim is the ultimate rechargeable wireless mouse. The Obsidian has two separate rechargable batteries, and features a touch-sensitive scrolling mechanism.

Saitek sent the Obsidian to us just because it shares my online handle. Beyond that, we didn't really share much else in common, as it's a mouse and I'm not. The Obsidian does, however, officially support USB 2.0 and Windows XP, XP64, and Vista. Unofficially, we found it to work just as well in Linux. 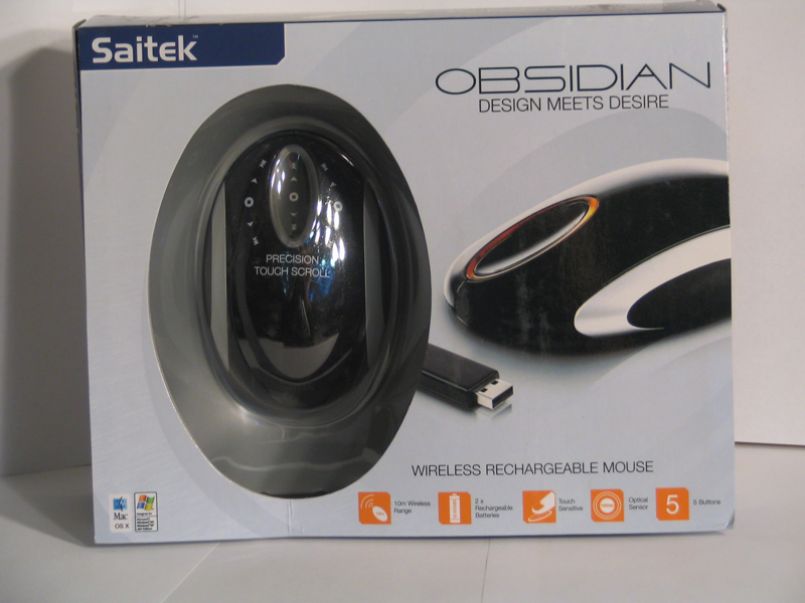 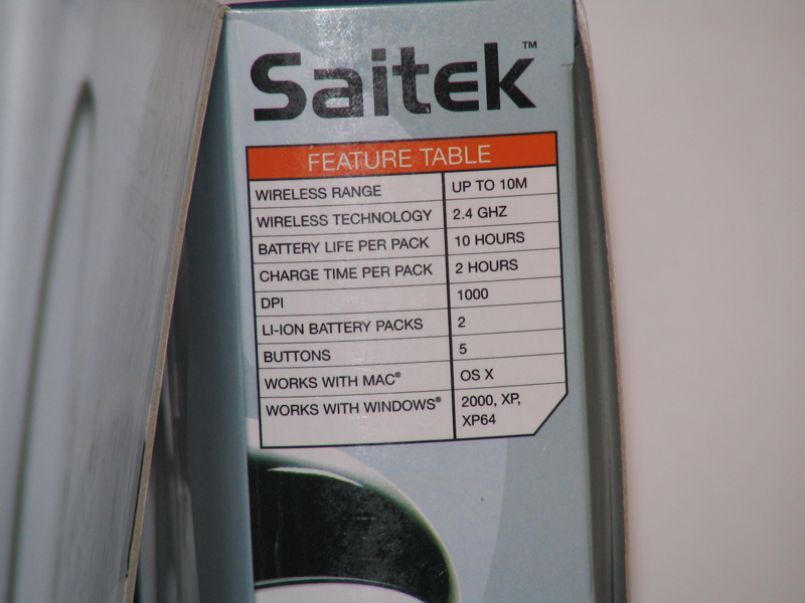 Let's look at what features makes the Obsidian so great.
The Obsidian uses an LED sensor rather than a Laser to track movement, but at 1000dpi, this doesn't make a huge difference in performance. The limiting factor in an wireless device is always the delay that occurs between receiving and decoding the wireless signals sent by the mouse. For the average user, this delay shouldn't even be noticable. But for a performance user, such as gamer or photoshop user, this delay may become painfully obvious. Will it be so with the Obsidian?

Saitek also claims that with the two Lithium-Ion batteries, you'll be able to use the mouse 24/7. We want to examine whether this is the case or not. The big factors here will be how long the batteries last, and how long it takes to recharge. Saitek claims the batteries last up to 10 hours and recharge in only 2. Let's find out how true this is! 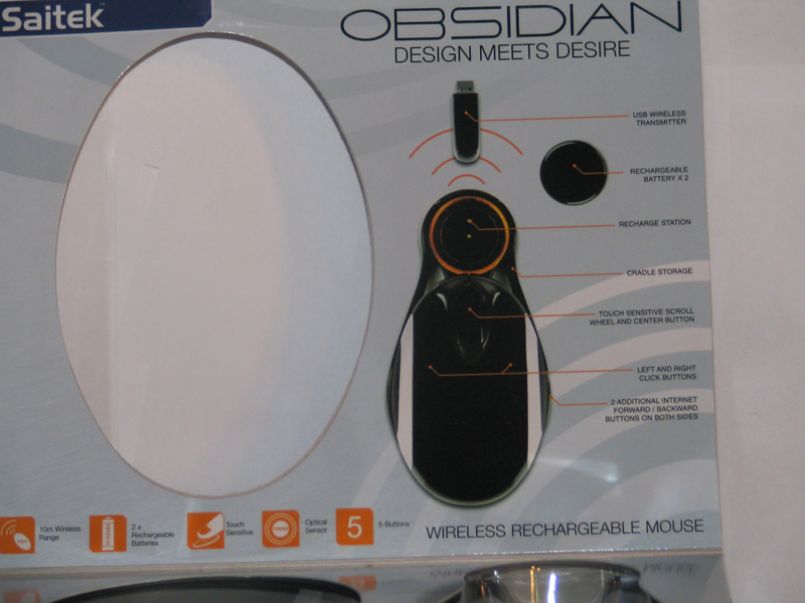 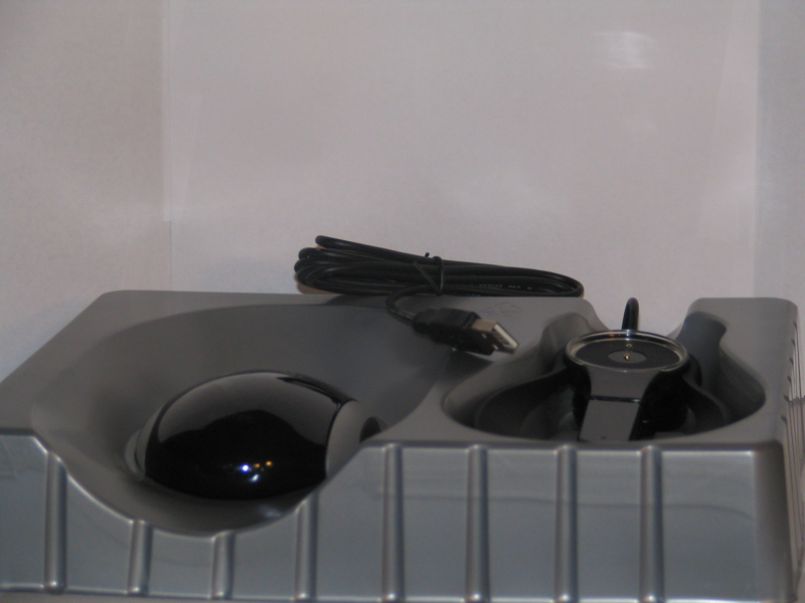 Other factor's we'll definitely want to look at are the touch scroll, wireless range, and the plug-and-play compatibility.

The Obsidian, much like myself, derives it's name from a volcanic rock of the same name. Obsidian is formed when lava is rapidly cool, such as when a lava flow reaches the ocean, or an underwater volcano reaches the cold of the deep seas. In certain cases, other minerals also become visible in what is called "snowflake obsidian". This is where snowflak sparkles appear in the obsidian, which are usually off-white in color. "Snowflake Obsidian" is how the Obsidian is patterned. There are sparkles of white and silver within the black, and a silver stripe is on either side, further adding to the color scheme. The mouse is certainly well-named. 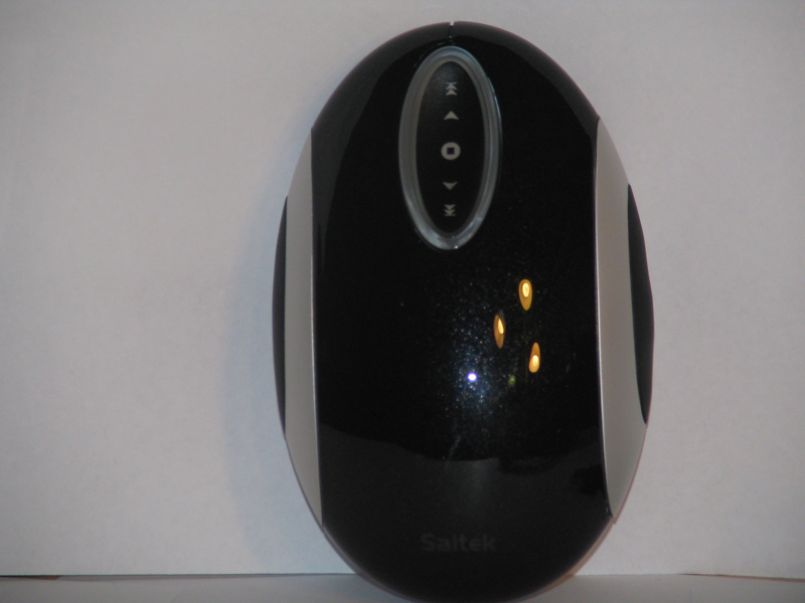 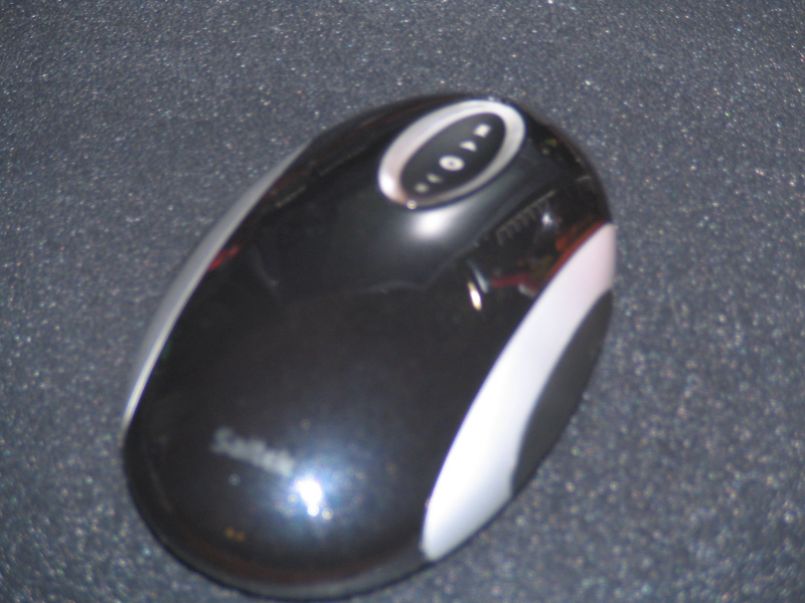 The batteries are two small cylinders that fit on the underside of the mouse. Following the color scheme, one is white, and one is silver. One the conductive side, there are two metal strips that form two circles so you can put the battery in any way (or charge it any way). This is much simpler than have to deal with AA batteries. You can also notice the sliding mechanism on the bottom of the mouse, which releases the battery. 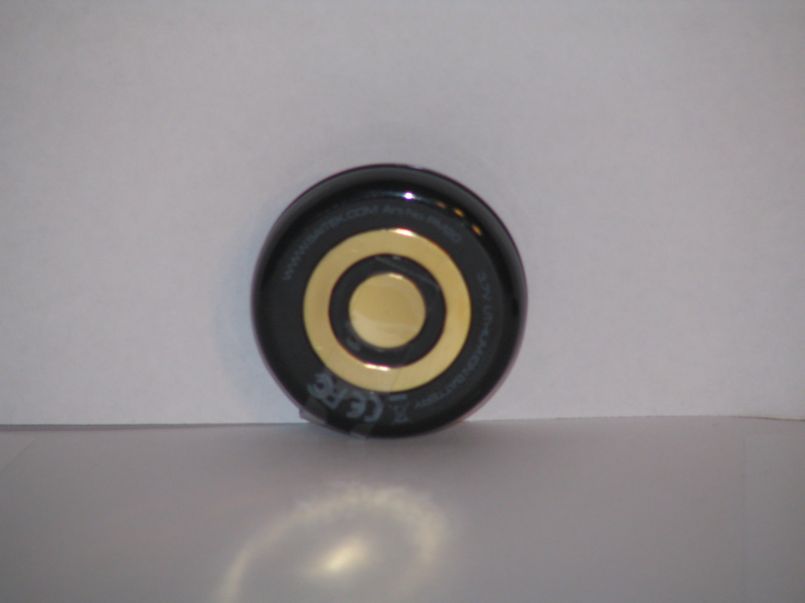 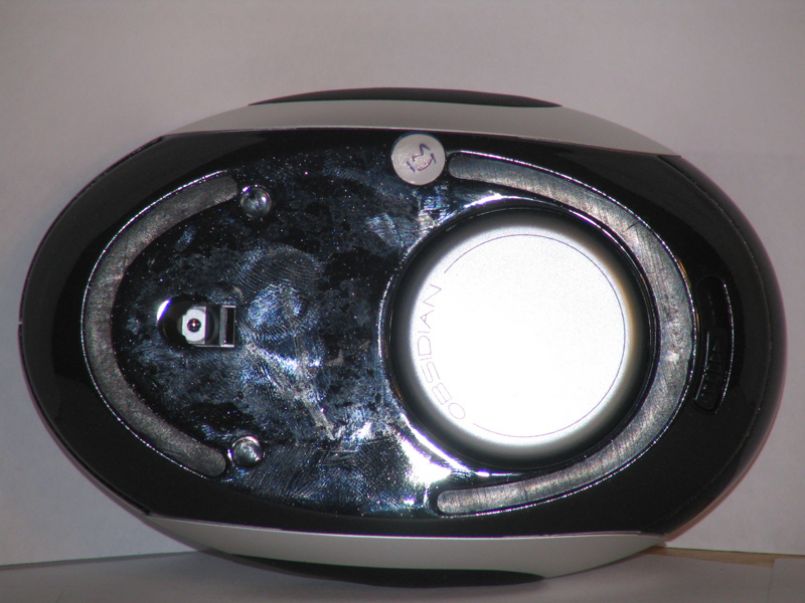 The cradle seems to be more of a battery charger than a cradle. The mouse fits on top, but it's not a natural feel. There isn't a spot that feels "natural", or a spot where the mouse is supposed to sit. When I put the mouse down, it feels like I need to rock it around until it finds a firm spot to sit in. This is more of an obsessive-compulsive issue than anything else, but it would be one less thing to worry about. The nice part about the charger is that the receiver is detachable. You can plug the receiver into a spare USB port on your LCD or Computer, then use the USB port on the cradle as a USB extension cable. 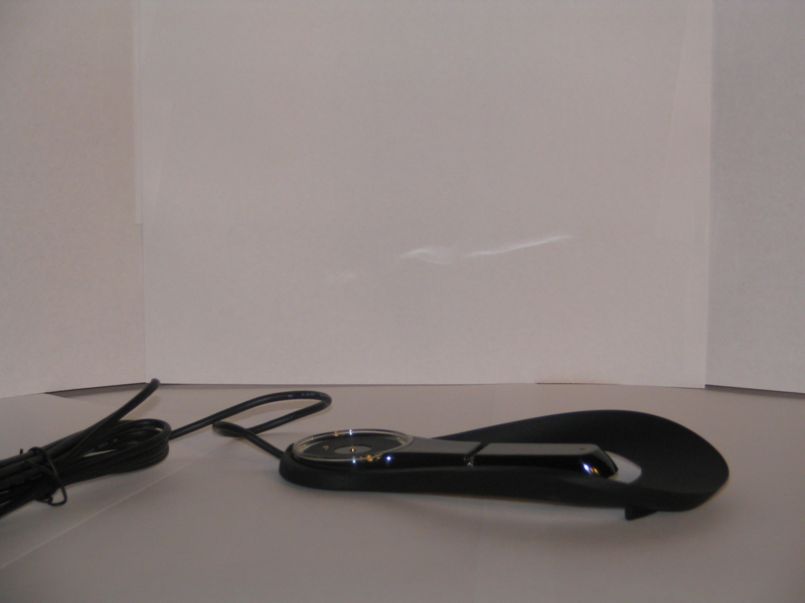 Installation was a breeze. Saitek does not include a driver CD because the mouse doesn't need them! As soon as I plug the mouse in, Windows detected it and had it working in no time. Ubuntu and Knoppix' configuration utilities also had no issues setting up the mouse for regular use. Oddly, this is marketted as a 5-button mouse, but Linux sets the Z-Axis (scroll) buttons to 6 and 7. My guess is that the touch sensor in the scroll merely emulates button presses depending on where your finger is. In hardware terms, there is 7+ buttons, but there are only 5 physical buttons. Regardless, it's awesome that the touch sensor works without a special driver.

Before beginning testing, I used one of the batteries until it was dead. I sat it on the charging pad on the cradle and let it charge for about two hours, or until the LED ring around the charger turned from red to green. I put it into the battery back in to the mouse and set the spare battery on the charger. Let's get to business! The first thing I noticed was the high-sensitivity of the mouse. At 1000dpi, I didn't need the mouse anywhere near it's full capability. Unfortunately, this meant that I had to access the control panel or control center (Windows and Linux respectively) to lower the sensitivity. I'm used to being able to adjust it via a utility hiding in the taskbar area.

Using the mouse in everyday activities such as browsing, reading documents, and dragging&dropping resulted in little notice in any lag from the wireless connection. As the wireless connection speeds continue to increase (from 2.4GHz to 5.8GHz or whatever it may be), I imagine we'll see less and less lag. A few years ago I used the Logitech MX700 as my primary mouse, and the lag became very apparent at times. With newer technology, the lag isn't as bad. All the buttons were very functional. The mouse is quite symmetrical, and the buttons on either side of the mouse perform back and forward events for programs such as browsers. It's a little difficult to figure out which one you're pushing, and it's awkward trying to find a proper spot to hold the mouse at the use the buttons. I'm sure one would get used to it, but it shouldn't be difficult to get accustomed to a general-purpose mouse. I do give props for Saitek for creating a mouse that gives right- and left-handed users equal access to this buttons. Knoppix and Ubuntu both recognized these buttons and set them up properly.

The scroll pad also worked great in Linux and Windows, although it was difficult in both operating systems to create a center button click. You should be able to tap the pad for it, but it took some effort to do this. Even then, it more often than not created a scrolling effect. Regardless, scrolling works by moving your finger up or down the pad. At the top and bottom of the pad is a "faster" scroll function, which I found unusable in Linux. It appears that there are buttons detected, but neither Ubuntu nor Knoppix do anything with them. I imagine you could set this up if you wanted to.

The next obvious test is gaming! I decided to use Unreal Tournament 2004 to test the mouse out, given that it runs natively in both Linux and Windows. I'm also the most accustomed to this game, so it should be easy to see if the mouse lag is problematic for gamers.

Sure enough, I easily detected the lag created by the wireless connection. It wasn't so much that shots too long to fire, but more that I'm used to being able to move my mouse, click, and see a rocket, lightning bolt, or whatever projectile fire. I found that with the Obsidian, I was clicking before my cursor got to the location I wanted it. This essentially made "flick shots" ineffective, where you can't snap your wrist and shoot quickly.

The best experience from the mouse comes from the touch-sensitive scroll pad. It feels much more "natural" to use the scroll pad to switch weapons, rather than using a wheel. If only the Obsidian were a wired mouse!

So where did we land time-wise? After using the Obsidian for a little under 10 hours, the battery died on my. My stopwatch was at 9:33:17 when this happened. Not quite the 10 hours that Saitek promised, but damn close. I imagine that the extra and quick movements made in Unreal Tournament drained the mouse more than desktop usage, so I'm not entirely upset by this. The spare battery had finished charging hours before, so I just swapped batteries and continued on my merry way. 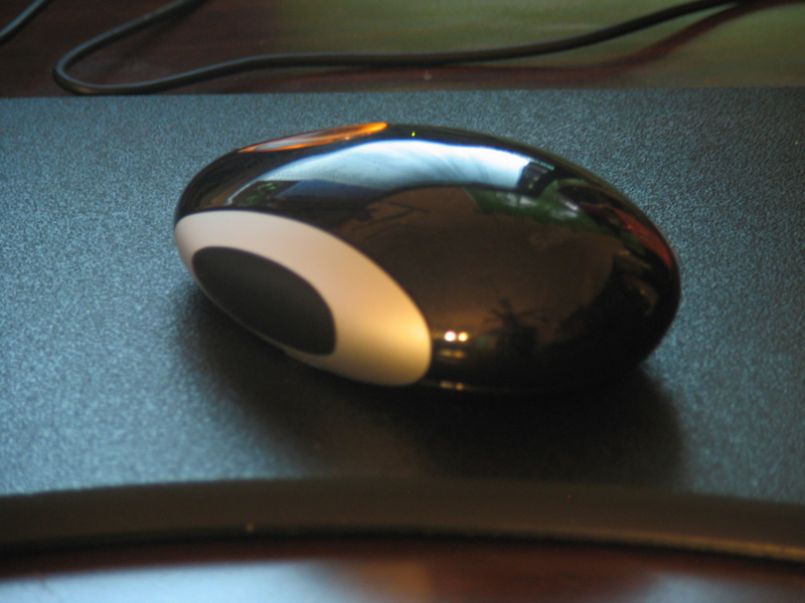 The Obsidian is one of the most innovative mice I've seen in some time, from it's unique battery design, to the touch-sensitive scroll pad. I hope that Saitek has patented the touch-sensitive scroll pad, and I hope even more that they release this feature in a future gaming mouse. I enjoyed my time using this mouse, and it could only have been improved by a more comfortable grip while using the side buttons and better wireless performance.

I'm not sure if the wireless lag can be improved with current technology, but I'm sure Saitek will continue rolling out wireless mice as new technologies continue to emerge.