Years ago, I remember buying many Sunbeam-branded cold cathode fluorescent lights (CCFL). Since that time, they've expanded their product offers several times over. You can find cases, power supplies, keyboards, and more all bearing the Sunbeam name. Tuniq is a new divison of Sunbeam, and they offer many similar products, but with a much more enthusiast-like focus. They sent us some of their new thermal compound, Tuniq TX-2.

In the days of the Pentium 1, Thermal Grease wasn't much of a necessity. Heatsinks were attached more with a thermal glue of sorts, something still used with many chipset and videocard heatsinks. Thermal Grease became popular around the same time as CPU Overclocking. True enthusiasts looked for the best conducting materials to place between their CPU and heatsink. With larger heatsinks and more thermally-stable processors, there isn't as much about thermal grease now as there was a few years ago. But thermal grease is still important. Many companies, especially AMD and Intel, put "thermal pads" on the bottoms of their heatsinks to assist in the transferring of heat from the processor to heatsink. These aren't as efficient as thermal grease, as we will show you shortly. The question is: how much better is thermal grease?

There are many important things to consider when choosing a thermal compound. Luckily, Tuniq TX-2 covers all the bases. Above all the other features of the TX-2 compound, I found the last one to be the most useful. In olden days when Athlon XPs didn't have heatspreaders (and the core was exposed), if you spread a compound such as arctic silver and got some anywhere other than the die, you risked the chance of connecting some of the exposed bridges. Sometimes, this did nothing, other times, it could fry your CPU. 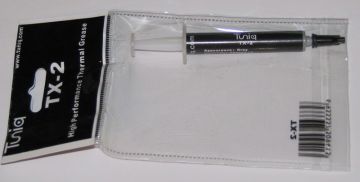 Or, if you're swapping heatsinks and decide to leave the CPU in the machine, you might accidentally drip on your motherboard and cause another short. With the Tuniq TX-2, these aren't issues. Cover your motherboard with the grease and be merry! Or that might be messy and expensive. But you could if you really wanted.

We decided to test the Tuniq TX-2 on our favorite test bench, which features one of the low-wattage AMD Athlon X2 processors, the 3600+ to be specific. We know that the Tuniq will perform better than the thermal pad that comes with the stock heatsink, but we wanted to see if it gave us any advantage with a processor that already runs cooler than most. First thing we had to do was get rid of the thermal pad that was already on the cpu and heatsink. Since we don't want to scratch the CPU or heatsink (it would affect thermal transfer), we opted for little bit of rubbing alcohol. Sure enough, the pad and resulting residue came off with enough rubbing. We never found a truly satisfactory way to remove old thermal compounds with off-the-shelf items, but one of our friends did make his own concoction. Unfortunately, it was never perfected. If you must know, his parents own a chemical company.

To install, we put a fair-sized dab of TX-2 on the CPU from the syringe. I've seen some people just put their heatsink back on at this point, thinking that the heatsink will spread the thermal compound out on its own. Unfortunately, this isn't the case, especially with low-bleed compounds such as the Tuniq TX-2. To spread it, we used an expired credit card. It's flat, thin, and wide. Sounds like a perfect spreading device. It wasn't a card I used often, but if it was, I could have cleaned the edges with rubbing alcohol to make sure nothing mixes with the thermal grease. 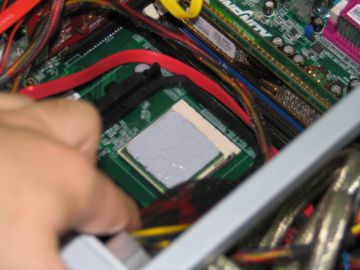 Spread it out all over the heatspreader, and add more if you feel it necessary. After you're done, put the heatsink back on fire it up. You can jiggle the heatsink a little bit if you want. It'll help the thermal compound fill in all the spaces. Even with the jiggling, it's still necessary to give the thermal grease time to "burn in", or to correctly bond between the two surfaces. For optimal burn in, I decided to leave my machine on for ~200 hours. I tried to keep a graph of the idle temperature dropping over the period of this time, but I lost power at about 150 hours and lost the graph.

After the burn in, our CPU idled at 26°C while at the command prompt. This is 8° lower than the 34°C the machine ran out with the thermal pad. That's an 23% percent improvement. Since we are a Linux site, we have other methods of maxing-out our CPU usage than gaming. Since the machine runs Gentoo, anything we install has to be compiled from source. We opted to let the machine compile the KDEBase Package since it's a large program and tends to take a nice long time to compile. This will ensure we get good results after a few minutes of compiling. The highest temperature the CPU reached under a full load while compiling was 35°C, which was 10° lower than the 45°C the CPU ran at with the thermal pad. This is a 22% percent improvement. I tried running UT2004 to add a little more to the results, but the game didn't come close to using more than 50% of my system resources, and the temperature wasn't anywhere near as high as when the CPU was compiling.

The Tuniq TX-2 was an easy installation, provided you're comfortable with working inside your PC's chassis. If you're afraid of breaking something, wear an anti-static bracelet, and remember that the thermal grease isn't conductive, so you won't short anything out. After the initial burn-in, we saw a definite improvement in temperatures over using the stock thermal pad. Given both idle and full load temperature of the CPU using Tuniq and the Stock pad, we found that Tuniq TX-2 gives about a 22% improvement in CPU temperatures. So for anyone looking to lower both CPU and ambient temperatures (which thusly affects the rest of your system temps), Tuniq's TX-2 Thermal Compound is a must have. Think you're thermal pad is enough? Think again! If you're building that new HTPC that you want to run silently, you're not going to want to have that many (fast) fans. Using the Tuniq TX-2 compound, you can lower the temperature of not only the CPU, but the case temperature as well, resulting in less need for more fans and a quieter system once you rid yourself of the unneeded fans.