With a little work, full 3D acceleration, and hardware decoding and encoding are fully functional. 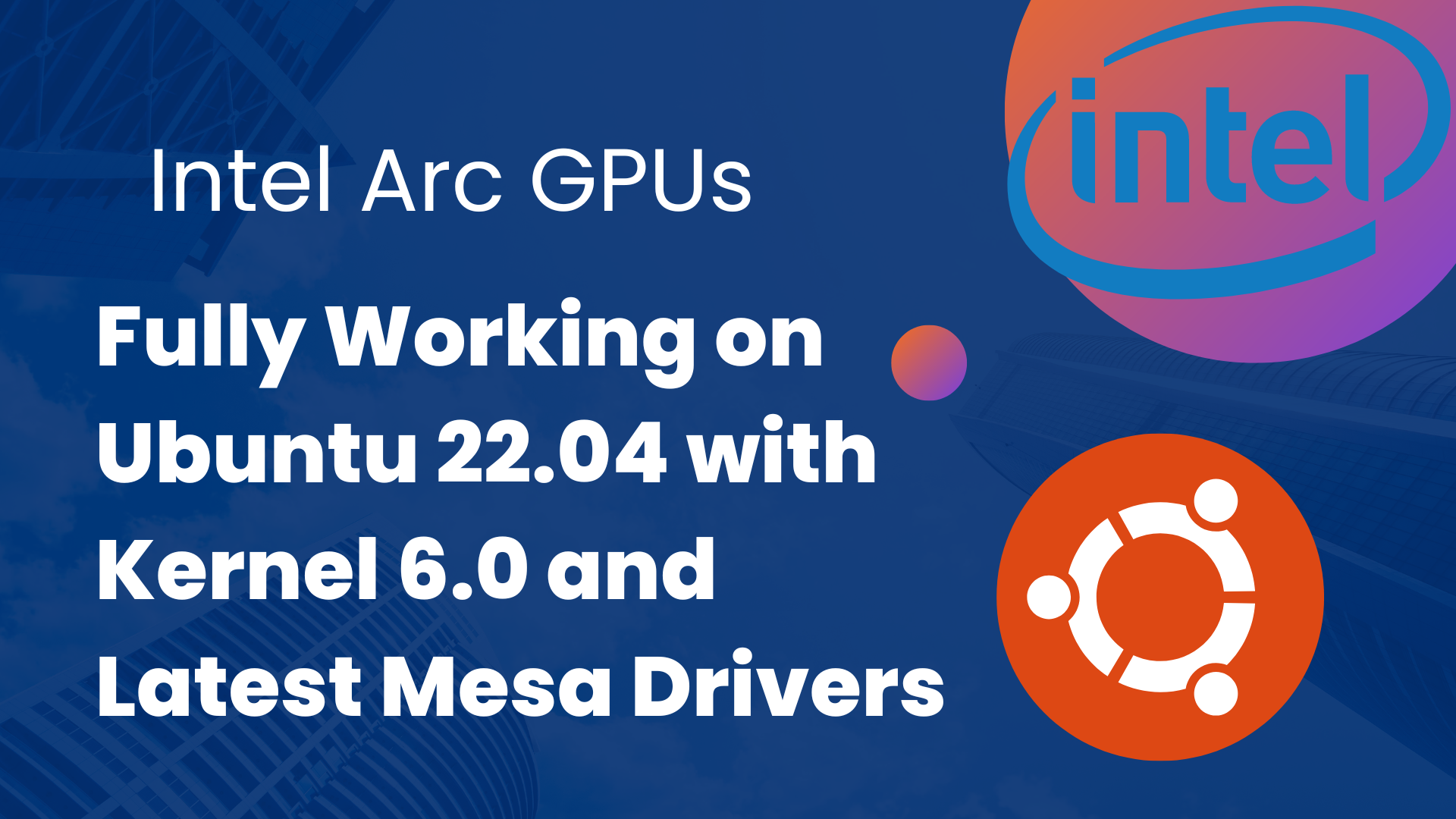 With the release of the 22.10 flavors of Ubuntu recently, I was hopeful this latest release would be ready for the (also recently released) dedicated Intel Arc GPUs. Unfortunately this wasn’t the case, as attempting to load the Kubuntu 22.10 installer from USB resulted in a blank screen. I was then given hope by Intel’s release of “packaged drivers” for the Alchemist GPUs for the 22.04 flavors of Ubuntu, but these hopes were unfortunately dashed as well after multiple attempts on fresh installs of 22.04.

After reviewing what Intel’s instructions were installing, I decided to try another fresh installation of 22.04, however fully deviating from their instructions and moving on to Linux Kernel 6.0 and the bleeding edge Mesa stack. Thankfully this process resulted in very little editing of configuration files, and only needing to manually compile one package.  This process should also be repeatable on the 22.10 flavors of Ubuntu as well.

Before beginning, I’d like to suggest leaving any integrated graphics enabled, as well as ensuring an SSH server is running in the event of a blank screen that could result from any number of reboots. After running through this process twice, I believe the following instructions should not result in a blank screen.

The first step is to enable Resizable BAR in the motherboard's BIOS. This typically requires a newer motherboard and processor, such as a Ryzen 3000-series processor or 10th Genetation Intel Core processor, or newer. Secure Boot is not required for this to work, and resizable BAR isn't necessary required, but it greatly increases the performance of the GPUs.

The next milestone of the Linux Kernel was released on October 2nd, and the Ubuntu-optimized version was released shortly thereafter. The necessary kernel packages can be downloaded from Ubuntu’s kernel PPA:

Then installed via apt:

The latest i915 drivers can be found at a Gitlab repository. The pre-built Ubuntu releases are sitting behind a Proton download, so downloading these is best done from a browser. They download link can be found here.

Once the file has been downloaded, installation once again is down through apt:

Unfortunately the 22.04 and 22.10 flavors of Ubuntu both ship with relatively older versions of Mesa, and Intel has been dropping updates to support their dedicated GPUs for the past several months, meaning the best support for their GPUs is only available in the latest releases of Mesa, specifically 22.2.x and greater. The oibaf PPA has made the latest Mesa stack available to Ubuntu users for several years, and their releases have nearly always been very stable.

One of the highly anticipated features of the dedicated Intel GPUs are its hardware encoding and decoding capabilities for video. Whether streaming or video editing, the Alchemist series GPUs pack some powerful hardware capabilities. Unfortunately, as with everything else in this article, these features don’t work out of the box. The Intel Media Driver will need to be manually compiled and installed.

Next, install the required libraries and tools required to compile the driver:

Then clone the latest release of the driver code:

The last step to get the Intel Arc GPUs working requires a change to GRUB’s configuration. This is meant to force the correct Intel i915 graphics driver to be detected and loaded at boot based on the PCI ID of the card.

Inside this file, find the line that looks like: GRUB_CMDLINE_LINUX_DEFAULT="quiet splash”

Save the file, then upgrade grub and reboot.

After the above instructions have been completed and the system has been rebooted, the system should now be running Kernel 6.0, the latest Mesa drivers, and latest firmware. The dedicated Intel GPU should also now be fully working for 3D Acceleration. These steps can all be verified from the command line:

Some additional packages will need to be installed to support Steam on the system. Once these have been installed, the Steam executable itself should handle installing any remaining dependencies.

Final Thoughts and Next Steps

After completing these steps, I was able to load up games such as Borderlands 2 without any trouble from Steam. Performance seems reasonable at the moment, however I haven’t fully benchmarked any of the GPUs I presently possess. I’m sure there will be some problems and additional tweaks to get performance to the levels Intel has advertised, however the coming weeks will provide plenty of bugfixes and additional support for these GPUs.

Initially I thought hardware accelerated video encoding and decoding was broken, but I was able to resolve this by manually building the Intel Media Driver, per my instructions above. This truly makes the system fully usable now, and I’ll be able to move on to benchmarking the Alchemist cards I currently have in my possession.