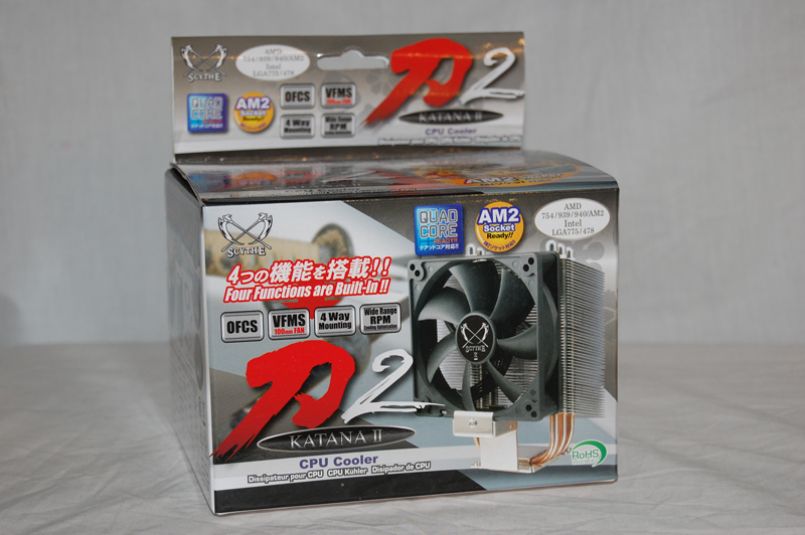 Scythe came to the U.S. in 2004 after being founded in Japan in 2002. Scythe set out to develop a super powerful yet super quiet CPU cooler. Scythe recently sent us the Katana II CPU cooler, which carries on the ideas of their initial venture. The Katana II features a 100mm fan, three heatpipes, and a vertical design. I'm going to put it to the test.

The Katana II's packaging comes to us straight from Japan. The front of the packaging has a picture of the Katana II, as well as it's logo in both English and Japanese. The Katana II's four primary features are listed on the front as well: Oval Fin Contact System (OFCS), Versatile Fan Mounting System (VFMS), Four-way Mounting, and Wide-Range RPM Cooling Optimization. I'll touch base on the features again later in the review. 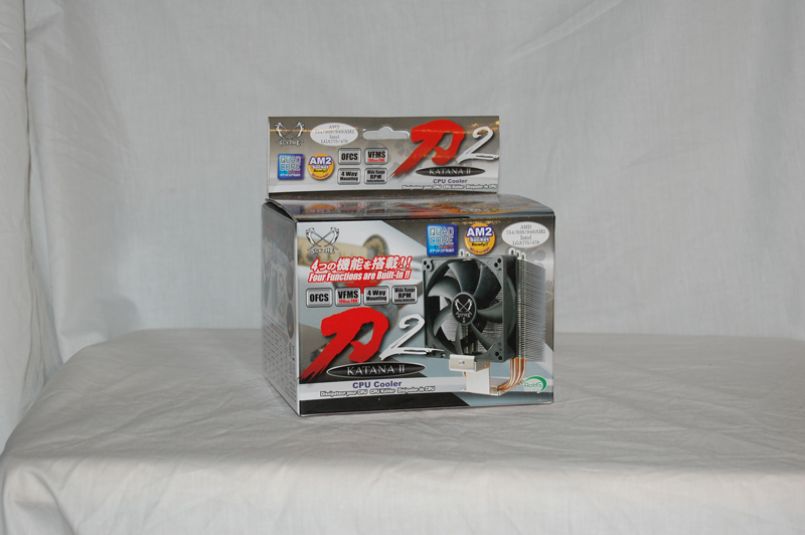 The left side of the box shows the unit's dimensions and specifications, as well as the three different mounting brackets. 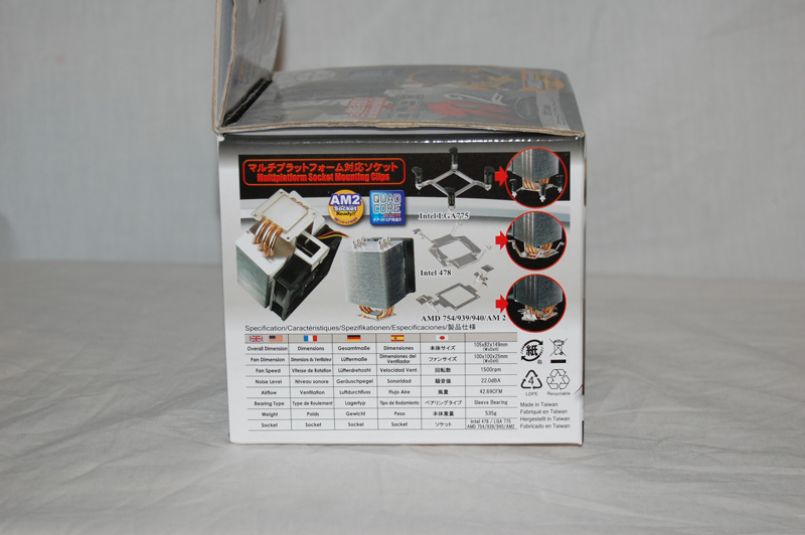 The rear of the packaging again shows the many features of the Katana II, and then delves in to the warranty and assorted information, in both English and Japanese. 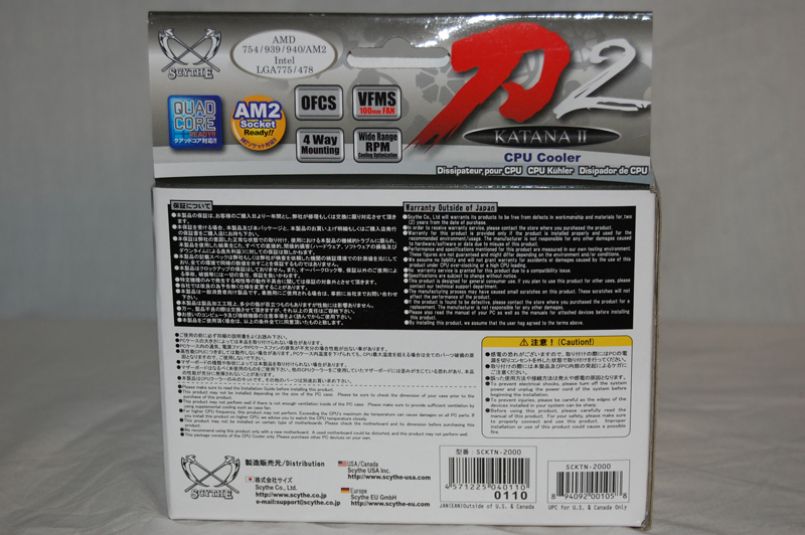 Finally, the left side of the box lists the four features of the Katana II and explains what exactly they mean. As I said earlier, I'll touch these in a later part of the review. 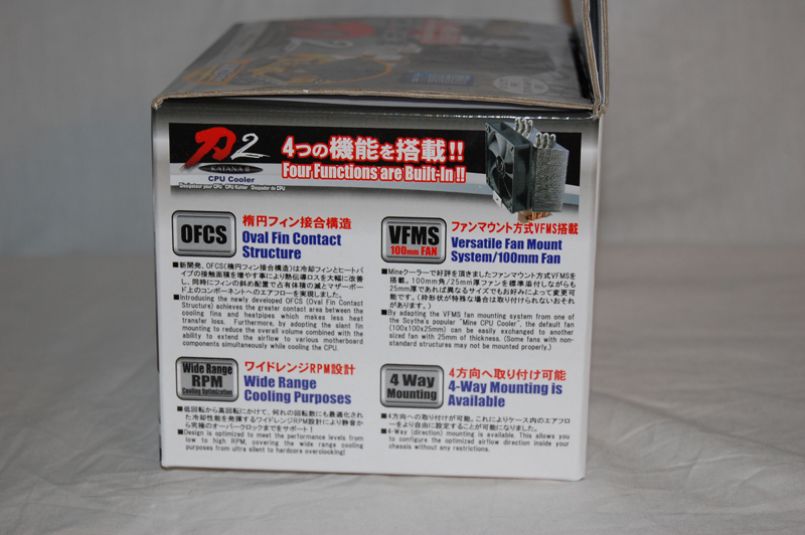 Inside the box are the unit itself, already assembled, and the three mounting brackets with screws. 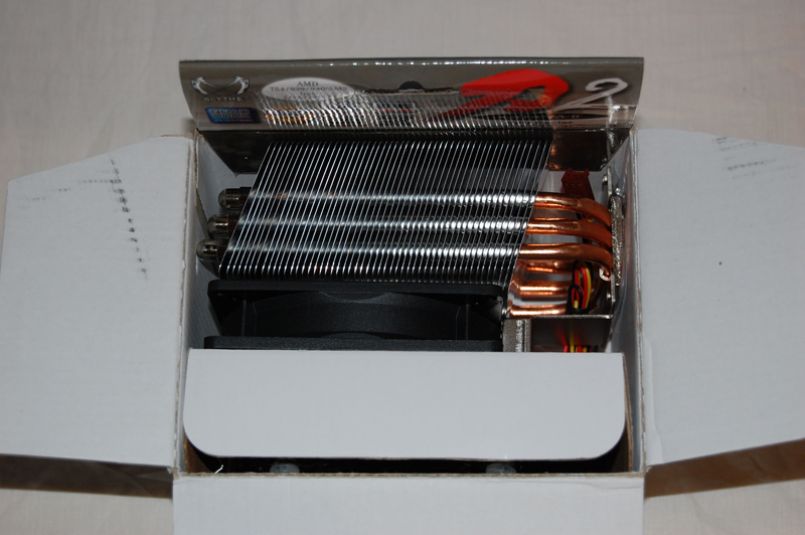 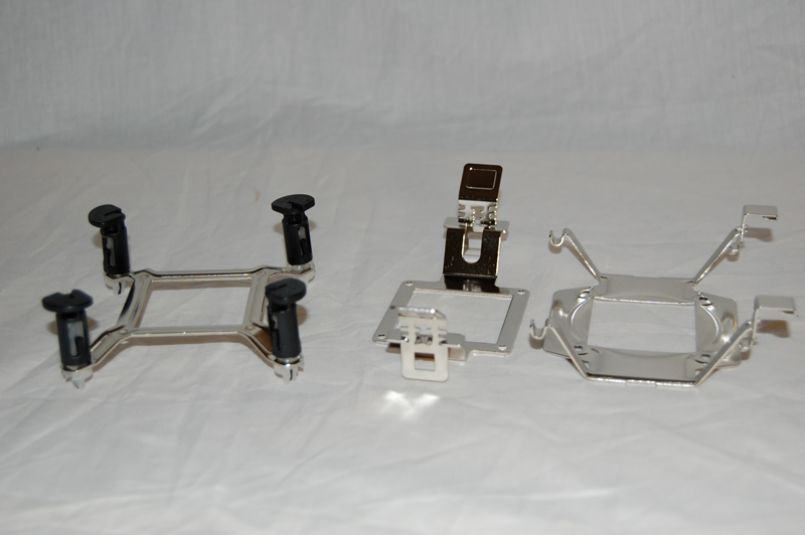 The Katana II is probably one of the more compact vertically-stacked coolers that I've come across, and this is welcome. This hopefully indicates I won't have to take the motherboard out of the case to install it.

Out of the unit's base rise three individual heat pipes on either side of the unit. Fins are stacked diagonally on these pipes, giving the Katana II a unique appearance. 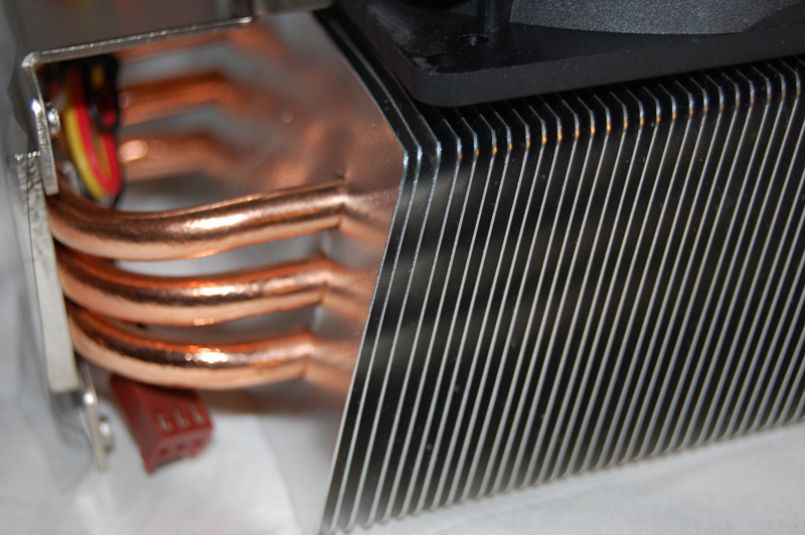 A 100mm fan is mounted on the higher side of the fins. 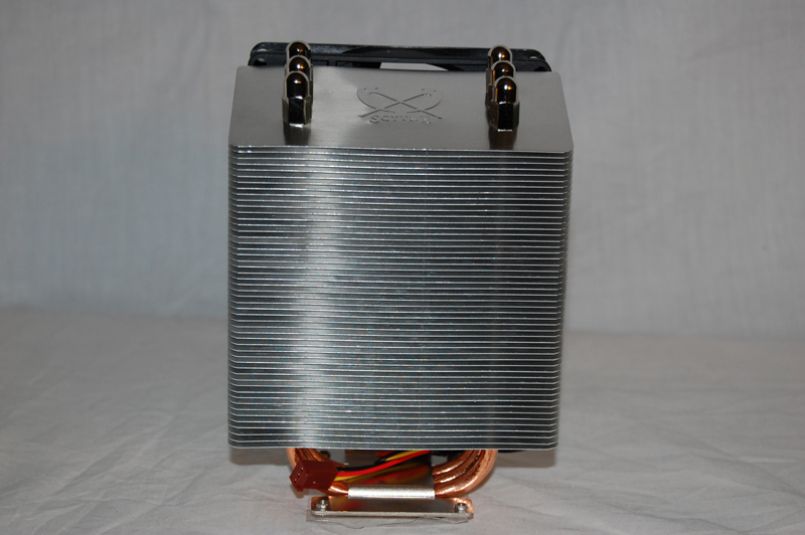 The unit's base has a mirror finish to maximize thermal transfer, and it shipped with a piece of plastic on it for protection. I'll go over the technical specifications of the Katana II before looking at the four primary features.

Oval Fin Contact Structure (OFCS) occurs where oval holes are put in the fins, and the fins are tilted when stacked up on the heat pipes. This creates a larger area of contact, leading to less heat transfer loss.

Versatile Fan Mounting System (VFMS) comes from one of Scytheâ€™s popular coolers. This allows almost any size fan with a 25mm thickness to be installed with this cooler.

4-Way Mounting allows you to configure the optimized airflow direction inside your chassis, as I described in the installation section.

Wide-Range RPM Cooling Optimization simply means that the fan is capable of running at various speeds, all the way up to 1500RPM.

Scythe provides mounting brackets for Intel sockets 478 and 775, and AMD sockets 754, 939, 940, and AM2. With these brackets, the Katana II can be positioned one of four ways inside the case. It's entirely up to the user. Simple screw the brackets in with the four included screws to the bottom of the cooler. 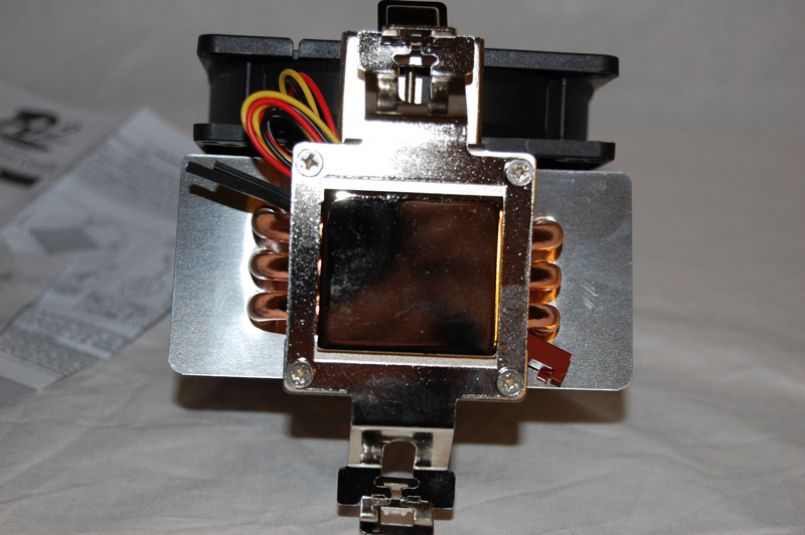 I installed the Katana II on to my Phenom-powered system on a Sapphire 780G motherboard. Previous heatsinks gave me clearance issues with one of the chipset, but the Katana II just sneaks in there. After spreading some Tuniq TX-2 thermal compound, I positioned the Katana II so the air was being blown towards the rear fan. This way, the fan is also taking in some of the hot air from the RAM and moving it backwards. As mentioned before, I'm installing the Katana II in to my Phenom 9500-powered computer.

For testing, I decided to use OCCT. OCCT will allow me to stress-test the CPU and graph temperatures and voltages accordingly. After the CPU had been running for about 24 hours, I started OCCT and let it run for an hour. Over the course of an hour, the CPU never hit 60°C, but typically hovered between 55°C and 58°C, which isn't bad. However, a 30°C jump from idle to full load isn't exactly what we like to see. I'll give the Katana II credit for keeping the temperature below 60°C, but I'd like to see this gap drop much more.

To be completely honest, I never noticed a change in sound coming from this PC. Previously installed was a Xigmatek HDT-S1283, and I don't think the sound level increased or decreased when moving to the Katana II. It's quiet.

Scythe's Katana II is only meant to be a mainstream CPU cooler, and not an enthusiast solution. This doesn't stop the Katana II from performing, however. During an hour-long test after giving the thermal grease a day to settle, the temperature of my Phenom 9500 never crossed the 60°C mark.

Another fact to consider is that the Katana II was released well before AMD's Phenom processors, and doesn't list it on it's supported processors. Regardless of this, the Katana II does a reasonable job of keeping the CPU cooler.